Objectives: Developmental dysplasia of the hip (DDH) describes a wide spectrum of abnormal hip development and maturation defects. Till date, there have been many classifications proposed to describe the severity of the disease based on individual hip joint pathology and radiological appearance. None of these classifications has taken patients with the bilateral hip disease into consideration. A new radiological classification system based on plain pelvic radiographs has been presented, combining all the pathological possibilities in both unilateral and bilateral cases and its reliability was assessed in patients aged 6-months and older. Methods: The plain anteroposterior pelvic radiographs of 120 DDH patients were classified according to the suggested classification system by five orthopedic surgeons. Inter- and intra-observer reliability was assessed to determine the reliability and validity of the new classification system. Results: Intraobserver differences were on an average 0, and interobserver differences were negligible. The intra- and inter-observer reliability was >97%. Conclusions: The classification system developed and tested in this study is highly reliable. Our system represents a complete classification than the systems already existing. This system of classification if applied in clinical practice will help in better describing and comparing the outcome in patients with bilateral disease instead of just focusing on the outcome of individual hip joints.
Keywords: Bilateral, classification, developmental dysplasia of hip, reliability

Developmental dysplasia of the hip (DDH) describes a common wide spectrum of hip abnormalities in children. Patients can present with immature, unstable hips, and acetabular dysplasia with or without subluxation or dislocation of the femoral head.[1] The diagnosis of DDH in early infancy depends mainly on clinical examination and hip ultrasonography (US).[2] The hip US is used in the first 4–6 months of life while diagnosis in older patients is performed using clinical and radiographic assessments. A plain anteroposterior pelvic radiograph may provide evidence of isolated dysplasia, subluxation, or dislocation in patients with unilateral DDH or a combination of any of these in patients with a bilateral DDH.[3]

It is worth noting that subluxated and dislocated hips are both associated with dysplastic changes.[4]

There are few systems available to classify hips with DDH according to the presence of the three issues categories above. The Tönnis classification is used by the Commission for the Study of Hip Dysplasia (CSHD).[5] Just to name few others are “Severin”,[6] Graf,[7] and the recently added classification by International hip dysplasia Institute (IHDI).[8] All these classification systems take each individual hip joint alone into consideration while classifying and clearly fail to classify patients with bilateral disease, especially when both hips have different pathologies.

The aim of this study was to introduce and evaluate the reliability of a new DDH radiological classification system based on plain AP pelvic radiograms in patients aged 6-months and older, expanding on the current practice of diagnosing hips as being either dysplastic, subluxated, or dislocated and providing a more comprehensive approach.

The study was approved by our hospital Institution Review Board. In total, 120 DDH cases treated at our center were randomly selected from our registry according to the following criteria:

The suggested classification system was discussed, printed, and distributed to the five participants (two pediatric orthopedic consultants, two pediatric orthopedic fellows, and one orthopedic resident). The five participants were asked to classify the 120 cases three times, at 1 month intervals, using the PACS Centricity system web version 3.2 (General Electric Healthcare, UK). Intra- and inter-observer reliability was then assessed to check the reliability and validity of the new classification system. On the basis of the following definitions and guidelines, the suggested classification was formulated and is presented in [Table - 1]. Isolated dysplasia is described as a radiographic finding of increased obliquity and loss of concavity of the acetabulum with an intact Shenton's line (acetabular index angle> 30°).[4] Subluxation is defined as the femoral head not being in full contact with the acetabulum. The radiological findings of subluxation include a widened teardrop-femoral head distance, a reduced central edge angle, and a break in the Shenton's line.[4] Dislocation, by definition, indicates that the femoral head is not in contact with the acetabulum. The classification ranges from Type 1A with single dysplastic hip and a normal contralateral hip to Type 3D with bilateral dislocated hips. All radiographs were taken in the supine position with X-ray beam centered in the middle perpendicular to the pelvis with the legs extended and internally rotated around 15°.

Five clinicians with different levels of experience took part in this study; clinicians recorded their classification of the same subjects' radiogram on three distinct occasions. [Table - 2] displays the summary statistics of the coded classifications and demonstrates that the summary mean values were generally stable, ranging from 5.3‘6.1, with good standard deviation values ranging from 3.1‘3.3. 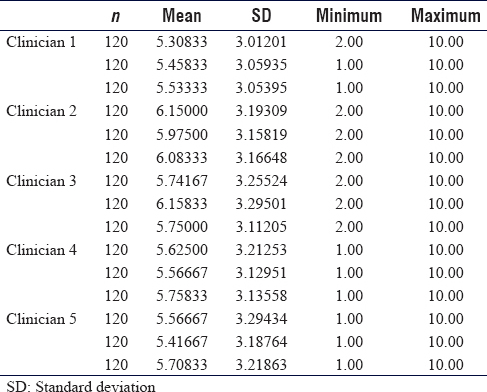 Mean intraobserver values differed by a maximum of 0.01, with a standard deviation of approximately 3. Testing these within-mean values against 0 yielded a nonsignificant difference (P > 0.05) [Table - 2].

Mean interobserver values differed by a maximum of 0.9 with a standard deviation of approximately 3. One-way analysis of variance revealed that out of interclinician, intersubject, and intraclinician variability, intersubject differences were responsible for most of the total variability (intraclass coefficient = 0.97). This indicated that intraobserver differences only accounted for 3% of the total variability, providing evidence for a high level of inter- and intra-observer reliability for the system.

[Table - 3] and [Table - 4] display the values of Cronbach's alpha coefficient which demonstrate a high level of reliability that was close to the maximum value of 1. In particular, [Table - 4] shows the impact of each observer's classifications with respect to the others to determine the impact of one or more observers on reliability. [Table - 4] indicates a uniform level of agreement and reliability for all observers. 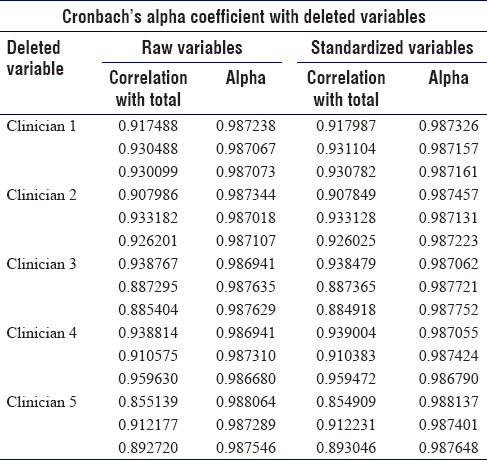 In older children, a single plain AP pelvis radiogram clearly delineates abnormalities in hip development. Worldwide, screening protocols are not followed rigorously, and as a result, we commonly see patients with DDH presenting with limping when they reach walking age.[9],[10] The new classification system tested in the current study assigns the patients one of the nine different possibilities along the spectrum of DDH, starting from the less severe pathologies (and less difficult to treat), i.e., dysplasia, through subluxation to the more serious pathology (and more difficult to treat), i.e., dislocation. Our system includes all possible combinations in a graded arrangement of pathological severity. We believe that this classification system simplifies the description of unilateral and bilateral hip developmental pathologies and will be useful for surgeons as well as researchers.

The Tönnis classification is used by the (CSHD). His system is based on the position of the femoral head epiphysis relative to the Perkin line (a vertical line through the superolateral margin of the acetabulum).[6],[11] This system was later modified by Zionts and MacEwen,[6] who divided DDH into four types. The other classification in use is “Severin”, which is frequently used to evaluate the radiographic outcomes of operations performed to treat patients with DDH.[7] Graf pioneered the use of US for the diagnosis of DDH and classified DDH into four major types based on US results. Other classifications, such as the Crowe system, are used to classify the severity of adult DDH.[8] Recently, another addition to the classifications have been introduced by IHDI, which is basically a modification of Tonnis classification.[8] The limitation of all these classifications is that they address individual hip joints and do not take bilateral cases into consideration.

How should a patient be classified if he/she has bilateral disease with any of the Tonnis grades on either of the hips? And can any of this patient's hips be compared with another patient with a similar grade but only one side involvement? Let us not forget that we treat patients and not individual joints. There is a genetic role [12] in patients who are born with DDH and treatment outcomes in patients with a unilateral versus bilateral disease with similar grades may not be the same. Further research needs to be conducted in this direction to study the effect of contralateral hip involvement in patients' outcomes, and this is not possible unless and until we have a proper system to classify such cases. After reviewing the literature, we found no comprehensive classification of DDH that includes the classification of bilateral cases although the pathology itself has been described in some detail. We believe that this classification makes the evaluation, description, and comparison of outcomes and diagnoses easier, clearer, and more comprehensive.

Most of the cases in the study were Type 3 (with all possible combinations), with Type 2 and then Type 1 being increasingly less common. It is possible that these results reflect the current actual frequencies of the pathologies in the population at large.

The classification system developed and tested in this study is highly reliable. Our system represents a more complete classification than the existing systems. This system of classification if applied in clinical practice will help in better understanding of outcome in patients with bilateral disease instead of just focusing on the outcome of individual hips.

Our special thank and gratitude to Mr. Mubashir Mohammed, who helped us in statistical work.