A 27-year-old female presented with pain and swelling. She gave a history of twisting ankle injury (inversion with plantar flexion). The swelling is more on the anterolateral aspect of the ankle. Her radiographs were unremarkable. She had a magnetic resonance imaging (MRI) that is shown here: 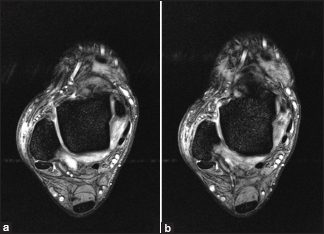 Axial T2-weighted images at the level of the anterior talofibular ligament (ATFL) demonstrate an absent ATFL; instead, only fluid is seen at the site of its attachment. Also, a torn anterior inferior tibiofibular ligament is shown.

Lateral ligament complex is the most commonly injured group of ankle ligaments and is often associated with other ligamentous injuries in the ankle. The lateral complex compromising the ATFL, the calcaneofibular ligament, and the posterior talofibular ligament is adequately managed with routine axial MRI.

The severity of the ligamentous injury can be classified into three grades:

Mechanism of injury is usually inversion with plantar flexion to the ankle.

Two-thirds of the injuries are isolated ATFL.

The author certifies that he has obtained all appropriate patient consent forms. In the form, the patient has given her consent for her images and other clinical information to be reported in the journal. The patient understands that her name and initials will not be published and due efforts will be made to conceal her identity, but anonymity cannot be guaranteed.