Objectives: Surgical intervention remains one of the best curative approaches in musculoskeletal (MSK) tumors. However, postoperative complications remain an issue, especially within the first 30-day postoperatively. Hence, the main objective of this study is to estimate the incidence and to identify the predictive factors of 30-day complications following MSK tumor surgery (MTS). Methods: This is a retrospective, descriptive study of 85 patients who had undergone MTS between 2016 and 2019 in our institution. The included patients were those who had MTS caused by a malignant tumor or giant cell tumor. Results: Twenty-eight patients (33%) had a complication during the first 30 days following surgery. The most common complication was surgical site infection in 64% (n = 18 / 28) followed by venous thromboembolism in 11% (n = 3 / 28) and then death in 7% of the patients (n = 2 / 28). Complications were distributed equally among genders. The complication rate was 36% in bone tumor surgeries (n = 22 / 61) and 21% in soft tissue tumor surgeries (n = 4 / 24). Ewing's sarcoma patients had the highest complication rate among bone tumors (36%, n = 8 / 22). Lower extremities' surgeries had the highest complication rate (35%, n = 18 / 51). Furthermore, 80% of the patients with a cardiovascular condition other than hypertension developed a complication (n = 4 / 5, P = 0.0322). Conclusion: One-third of the patients who underwent MTS developed a complication within a 30-day duration. The diagnosis of Ewing's sarcoma, surgery of lower extremities, and preexisting cardiovascular conditions was linked to a higher complication rate.
Keywords: 30-day postoperative complications, musculoskeletal tumors, orthopedic oncology surgery, surgical site infection, venous thromboembolism

Musculoskeletal (MSK) tumors are a diverse group of lesions that can originate in the bones or soft tissues.[1] MSK tumors are not uncommon compared to other types of neoplasms. In Saudi Arabia, according to the tumor registry of King Faisal Specialist Hospital and Research Center, MSK neoplasms are one of the top ten cancers that affect the pediatric population.[2] In addition, these neoplasms are one of the top twenty malignant neoplasms in adults across Saudi Arabia.[3] Ranging from simple benign to very complex malignant, each type of tumor is unique. As such, meticulous planning is required to determine the treatment modalities for the best therapeutic outcomes. Despite the risk of developing complications, ranging from surgical site infections (SSIs) to death, surgery remains one of the best options for many types of MSK tumors.[4],[5] Identifying the predictive factors for developing a complication during the 30 days will lead to better patient-centered care. Hence, the early prediction of complications within the 1st postoperative month will significantly aid in preventing and monitoring these complications, and by that, it will help in decreasing the mortality and morbidity rates, associated costs, and hospital stays. Collectively, these factors will improve surgical/therapeutic outcomes and will help in establishing better guidelines for preoperative planning. Thus, the pertinent questions are can we predict which patients are at a higher risk for 30-day complications? and how can we prevent and/or monitor them accordingly? To date, studies in the literature that estimated and predicted early postoperative complications of MSK tumors surgery are scant. Nonetheless, the duration defining “early” differs between studies, with the majority ranging from 2 weeks up to 3 months. In this study, we focused on the complications occurring within the first 30 days following MSK tumor surgery (MTS). It is of importance to mention that this duration as a definition of early complications is not a novel one, and multiple studies in the literature have been built on the basis of studying 1st-month postoperative complications since it allows proper monitoring by being neither of short duration as in 2 weeks nor of long duration as in 3 months. The main objective of this study is to estimate the incidence and to identify the predictive factors that might lead to complications within 30 days following MSK tumor surgery.

This is a retrospective, descriptive study of patients who had undergone MTS between 2016 and 2019. Patients who had undergone surgery due to a malignant MSK tumor or giant cell tumor (GCT) were enrolled in this study. The reason to include GCT is that it is a locally aggressive benign tumor, which is mimicking a low-grade malignant tumor.[6] A customized data collection procedure recorded relevant demographics such as age, gender, weight, height, smoking status, associated comorbidities, tumor type, tumor site, surgery type, duration of pre- and post-operational hospital stay, readmission within 30 days, complications within 30 days, type of complications, operational blood loss, and blood transfusion frequency. The American Society of Anesthesia Score was obtained from the patients' files.[7] All collected data were processed and analyzed. Data analysis was carried out by the Department of Bioinformatics and Biostatistics, King Abdullah International Medical Research Center (KAIMRC), using the SAS Systems (Copyright© 2002–2012 by SAS Institute Inc., Cary, NC, USA). Categorical variables such as gender and smoking status were described in frequency and proportions, while the quantitative variables such as age and weight were compared by analyzing means and standard deviations of corresponding data. Demographic and clinical characteristics were compared across the study groups using a t-test and Chi-square test for continuous and categorical variables, respectively. All data are represented in percentage and mean values and were used for comparative analyses, with a corresponding 95% confidence interval, and the statistical significance was considered at P ≤ 0.05. 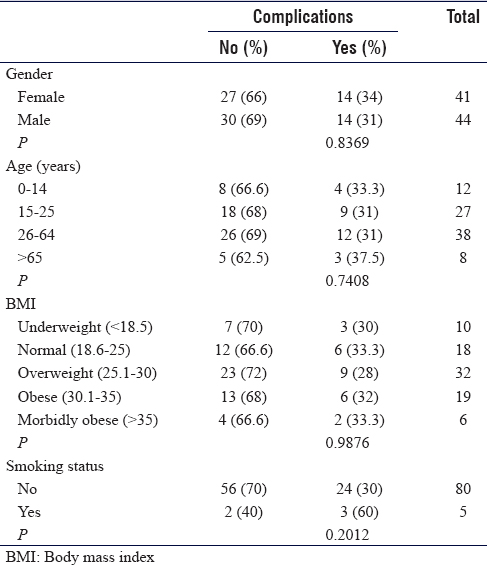 Table 1: Demographics of the sample

Postoperative complications within 30 days were observed in 28 patients (33% of those who underwent MTS) [Graph 1]. The most common complication was SSIs (64%; n = 18 / 28). Fourteen cases of SSIs were in the lower extremities, two in the upper extremities, and two in the pelvis. These infections primarily resulted from Pseudomonas aeruginosa, methicillin-resistant Staphylococcus aureus (MRSA), and Escherichia coli. Moreover, 15 cases of SSIs were located superficially (83%), and 3 cases were deeply located (17%). The second most observed complication in our study was venous thromboembolism (VTE, 11%; n = 3 / 28), two of which had MTS in the lower extremities and one in the upper extremities. Two patients with complications died within 30-day postsurgery (7%; n = 2 / 28). 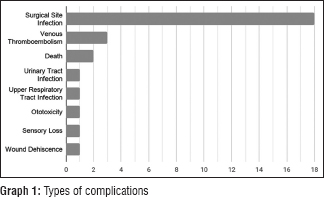 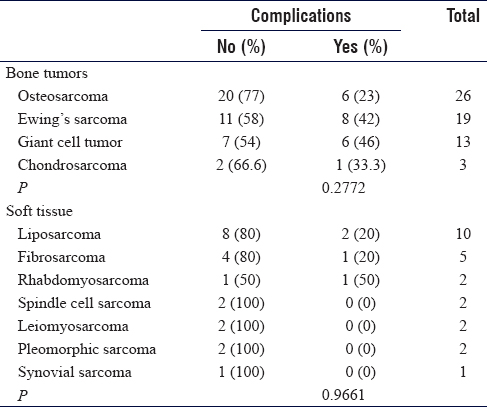 Table 2: Incidence of complications per type of tumor

MTS is challenging and potentially associated with a high complication rate. The identification of the complications within a short period of the surgical intervention would help healthcare providers to take caution in treating patients at a higher risk of developing a complication, resulting in better prognostic outcomes. Our results suggest that 33% of those who underwent MSK tumor surgery developed a postoperative complication within a month. The complications ranged from SSIs to death.

Our findings are consistent with previously published literature that showed SSIs being frequently associated with MSK tumor surgery. A study published in 2013 reported a 7% incidence rate of postoperative complications, with SSIs as the most frequent complication (2.7%).[8] Another study in 2019 reported that 61% of the patients had complications, and the most reported complication was SSIs as well.[3] Furthermore, a study in 2017 reported that SSIs were the most common infection following limb-sparing surgeries (35.6%).[9] It is important to note that these studies were not specific in including only 30-day postoperative complications. The presence of organisms such as P. aeruginosa and MRSA indicates that the infections were either hospital-acquired or the patient was immunocompromised. A study on 79 patients at King Fahad Hospital, Al-Khobar, reported that the most common organism causing SSIs in orthopedic surgery was MRSA (23; 29.1%), followed by the Acinetobacter species (17; 21.5%) and the Pseudomonas species (15; 18.9%).[10] These data are in some concordance with our findings since SSIs reported in this study also resulted from the Staphylococcus and Pseudomonas species. Interestingly, we did not have SSIs resulting from the Acinetobacter species. Identification precedes the elimination of the causative infectious agents, and thus, proper identification of the infectious agents is paramount. Surgeries with reconstruction following resection, especially pelvic, have been shown to have 11% higher incidence rates of infection than surgeries without reconstruction. However, we were not able to study this factor unfortunately.[11] Blood transfusion is significantly associated with developing a postoperative infection, which includes infections of the surgical site, the respiratory tract, the urinary tract, endocarditis, and meningitis.[12] This is hypothesized to be driven by the blood transfusion-related immunomodulation. In our study, we observed a higher incidence rate of postoperative complications in patients who received blood transfusion (38%; n = 6 / 16) than in patients who did not receive any blood transfusion (29%; n = 20 / 69).

The second most common cause of complications in our study was VTE. A previous study showed that pelvis or lower limb surgeries could be associated with VTE.[13] We are not aware of any studies that showed VTE development following MTS. Therefore, it is clear that the prophylaxis of VTE is necessary for orthopedic procedures, including MSK tumor surgery. In terms of site, the highest rate of complications in our study was observed in the lower extremities. A study published in 2014 reported that pelvic involvement and pelvic surgeries have a significantly high rate of complications.[14]

Our study has several limitations. First, the study's sample is limited since it was conducted in a single tertiary-care hospital, which could have led to an underestimation or overestimation of some postoperative complications. To overcome this, future studies involving multicenters and a large cohort are required. Second, we were not able to identify a few important clinical parameters that could have affected the rates of postoperative complications, such as some laboratory results before and after the surgery and the exact amount of the blood transfusion.

Despite the above limitations, our study will be an essential cornerstone of researches in this field in Saudi Arabia. In addition, if there are similar studies, this study will still be addition with different findings for sure as the setting is different. Moreover, estimating the incidence and identifying the factors of early postoperative complications are of utmost importance, and no single study is sufficient to achieve that goal. Thus, our work is vital in paving the path for future studies and will help the orthopedic tumor society in investigating 30-day postoperative complications further.

Thirty-three percent of the patients who underwent MTS developed a complication within a month. The two most predominant complications were SSIs and VTE. The diagnosis of Ewing's sarcoma, surgeries in the lower extremities, and preexisting cardiovascular diseases is most likely associated with a higher complication rate. Future studies involving multicenters and a large cohort are required for further validations of our findings.

As the two most predominant complications were SSIs and VTE, emphasis should be on preventing these two. To help prevent SSIs, the usage of perioperative antibiotic prophylaxis, and to continue postoperative is paramount. To reduce the numbers of postoperative VTE, patients should be assessed for the risk of developing thromboembolism before the initiation of VTE prophylaxis. Then, the patient's individual risk of thromboembolism should determine whether to start VTE prophylaxis or not. The diagnosis of Ewing's sarcoma, surgeries in the lower extremities, and cardiovascular diseases was linked to a higher complication rate. Thus, those with these factors should be monitored as patients with a higher risk of developing complications.

The data were collected after obtaining Institutional Review Board approval from KAIMRC (RSS19 / 026/R). Access for the data was only available to the research members. The confidentiality of all patients was preserved, and neither names nor medical record numbers were used or collected.

We acknowledge Ms. Bayan AlBaddah, from KAIMRC, for doing the statistical analysis.

WSA conceived and designed the study. MSA, AOA, KAA, ASA, and TMA acquired and interpreted data and prepared the initial draft. WSA, MSA, and AOA wrote the final draft of the article. All authors have critically reviewed and approved the final draft and are responsible for the content and similarity index of the manuscript.