Objectives: Surgical site infections (SSIs) have a significant impact on morbidity, mortality, and health-care expenditures. Therefore, the aims of the current study were to examine the incidence of SSI among patients who had foot and ankle surgery at large hospital in Riyadh and to identify predictors of SSIs. Methods: This is a retrospective cohort study. This is a consecutive study of patients underwent foot and ankle surgery between 2010 and 2014. The association between variables and infection status was analyzed using a logistic regression model. Results: The study included 295 patients. The incidence of SSI was 3.42%. The age and the type of surgery were significant predictors of SSI. Conclusions: Proper postoperative monitoring for high-risk patients may facilitate reduction of SSIs following foot and ankle surgery and improves health outcomes.
Keywords: Foot and ankle; infection; postoperative complications; surgical site infection

Surgical site infection (SSI) is defined as a wound contamination by microorganisms within 30 days following a surgery, or within 1 year if implanted object is placed, or if it is deep infection or organ space infection such as osteomyelitis.[1],[2],[3],[4] Among other factors, surgical wounds are exposed to numerous complications. The most common of them is infection, comprising between 46% and 58.7% of all surgical complications.[5],[6] In the United States, it has been reported that SSIs are the most common type of hospital-acquired infections.[7],[8]

SSIs have a significant impact on morbidity, mortality, health-care cost, and even hospital length of stay.[8],[9] There are about a half million cases of SSIs in the United States every year, and the mortality is directly linked to SSI in 77%.[7],[10],[11] Moreover, SSIs were found to be associated with as much as $1.6 billion excess in costs and with an increase of hospitalizations by nearly 1 million additional days.[12] Moreover, SSIs are associated with greater physical limitations leading to reduced quality of life.[13]

Previous studies have identified several factors that increase the risk of SSI, including prolonged surgery time more than the 75th percentile, complicated diabetes, peripheral neuropathy, smoking status, Charcot neuropathy, and obesity.[1],[3],[4],[11],[14],[15] The urgency of the surgery may have an impact on postoperative SSI. Emergency surgeries were found to have a higher rate of SSI than elective surgeries, which could be due to the severity of the surgical injury and soft tissue damage or having a prolonged surgery time.[11] Certain surgical techniques were associated with an increased risk of SSIs, for example, using bone graft or no drainage use.[6]

Risk factors for SSIs in previous studies are mostly based on patient populations with diverse orthopedic conditions. Therefore, it is unknown whether the incidence and risk factors of foot and ankle SSIs are similar to those of other conditions. After all, the field of foot and ankle surgery has a higher rate of SSIs than other elective orthopedic procedures.[16] This area of research is still developing in Saudi Arabia, and there are no studies that examined the incidence and risk factors of SSIs following foot and ankle procedures. Therefore, the aims of the current study were to examine the incidence of SSI among patients who had foot and ankle surgery at large hospital in Riyadh and to identify predictors of SSIs. Examining predictors of SSI is important to improve the quality of wound care because early identification of these patients may facilitate a positive impact on patients' postoperative care and improve health outcomes.

This is a retrospective study, which included all patients who had foot and ankle surgery between 2010 and 2014 at King Abdulaziz Medical City (KAMC) in Riyadh, Saudi Arabia. This hospital is one of the largest hospitals in Riyadh with a bed capacity of 1501.

There were 295 patients included in the study using convenience sampling who had 353 surgeries.[17] In this sampling method, data were collected from medical charts of all surgeries performed by a single surgeon (principle investigator).

SSI was the dependent variable and was diagnosed based on physical examination, signs, and symptoms of infection at the surgical site also positive swab wound cultures and tissue cultures, which were obtained from the patients' charts. This variable was used as a binary variable with no SSI as the reference category.

The study was reviewed and approved by the Institutional Review Board at King Abdullah International Medical Research Centre.

Out of 295 patients who were operated on, only 10 had documented postoperative SSI. The incidence of SSI was 3.42%. Males were the majority (70%) of SSI patients. The demographic characteristics of the study are summarized in [Table - 1]. 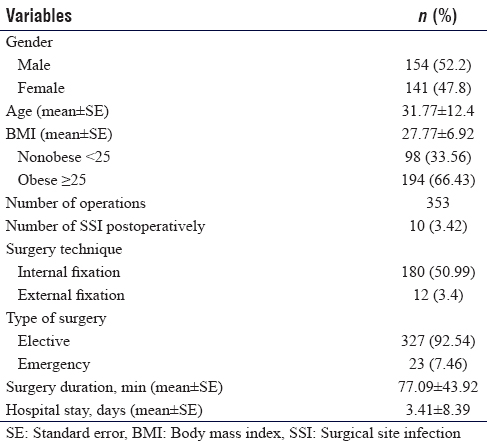 Table 1: Demographics and clinical characteristics of the study cohort (n=295)

Of the infectious organisms, methicillin-resistant Staphylococcus aureus was the most prevalent as it affected three patients. Staphylococcus coagulase-negative was the second prevalent organism affecting two patients. The other organisms include Pseudomonas stutzeri, Enterococcus faecalis, Enterobacter sp, Citrobacter freundii, and Escherichia coli, all of which were found once.

The univariate analysis showed a significant association between the type of surgery performed and the postoperative SSI, as SSI was diagnosed in 21.74% of the emergency surgeries (P < 0.001). The NNIS score was higher in patients who contracted an SSI (P = 0.001). [Table - 2] demonstrates the univariate analysis. 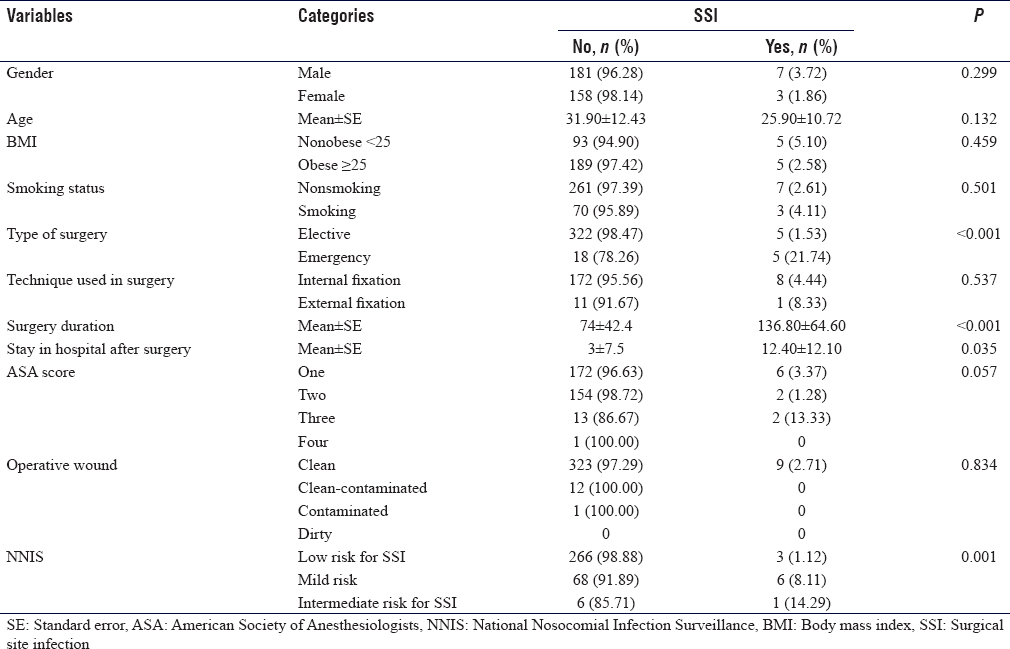 Our study found the incidence of SSI following foot and ankle surgery to be 3.42%. This estimate is slightly higher than the 2.55% reported previously following orthopedic surgeries in our country [11] and lower than the 6.8%, which has been reported by Khairy et al.[19] In the area of foot and ankle surgeries, the prevalence of postoperative infections varied from 1.0% to 6.5%, which is consistent with our study.[20],[21]

This study found the surgery type (emergency vs. elective) to be a significant predictor of SSI. Nevertheless, other variables, such as gender, were identified by previous studies as independent predictors of SSI as males were found to be more susceptible to SSI, which was not the case in our study.[22]

There are several limitations that need to be taken into account in light of these findings. One potential factor may be a referral bias because KAMC has a good reputation across Saudi Arabia. The study is also limited by the small sample size. Due to our small sample and young population in the study, there was no patient with SSI that had diabetes mellitus. It was expected, however, to find an association between encountering SSI and having diabetes mellitus.[14] Therefore, diabetes could not be studied as independent risk factors for SSI after foot and ankle surgery. Despite these limitations, this is the first study that informs clinicians, researchers, and policy makers about the incidence and predictors of SSI among foot and ankle patients in Saudi Arabia.

This study found age and surgery type to be significant predictors of SSI. Proper postoperative monitoring for high-risk patients may facilitate reduction of SSIs following foot and ankle surgery and improves health outcomes.

We appreciatively recognize Ms. Shaden B. Al-Subaih without who this study would not have been possible. We would like to express our gratitude for her assistance and cooperation in data collection.

OAA-M conceived and designed the study. ASA and MAO conducted research, provided research materials, and collected and organized data. MIB analyzed and interpreted data. NSA-K wrote initial and final draft of the article and provided logistic support. All authors have critically reviewed and approved the final draft and are responsible for the content and similarity index of the manuscript.