Influence of time to surgery and pin fixation (lateral or crossed) on Flynn's criteria in Gartland type II and III supracondylar fracture: A retrospective study on 129 patients

Objectives: There is a lack of consensus about the ideal pin configuration (lateral vs. crossed) and time to surgery regarding supracondylar fractures. We aim in this study to evaluate the influence of pin configuration and time to surgery on the outcome, using the Flynn criteria. Methods: Retrospective study of all children with supracondylar humerus fracture (SCF) Gartland types II and III treated in a single center from 2007 to 2017. Outcomes were classified as satisfactory or unsatisfactory according to Flynn's criteria at 6 weeks after surgery. Demographic, clinical, and surgical characteristics, as well as complications, were analyzed. Inferential analysis was performed by Pearson's correlation coefficient or Fisher's exact test for categorical variables when indicated. Results: One hundred and twenty-nine patients met the inclusion criteria. Mean patient age was 6.3 ± 2.5 years old, and 59.7% were males. Gartland type III fractures accounted for 57.4% of cases. Satisfactory outcomes occurred in 60.5% during this period. There was no difference in outcomes between the type of fixation and time to surgery. All cases of iatrogenic ulnar nerve injury occurred with crossed pin configuration. Conclusion: Lateral or cross fixation and time to surgery do not influence functional outcomes after surgical treatment of SCF in children, but lateral fixation decrease the risk of ulnar nerve injury.
Keywords: Bone wires, closed fracture reduction, fracture fixation, humeral fractures, orthopedic fixation devices, supracondylar fracture, time to treatment

Supracondylar humerus fracture (SCF) is the most common elbow fracture and the second most common pediatric fracture overall.[1] Extension type fracture represents up to 95% of cases, classified by Gartland as types I and III according to the severity of displacement.[2] Leitch et al. included type IV fracture, characterized as an unstable fracture in both flexion and extension due to an incompetent periosteal hinge circumferentially, which has an impact on treatment.[3],[4]

Closed reduction and percutaneous pinning is the treatment of choice for Gartland types II and III when surgery is indicated, but no consensus exists over the ideal pin configuration (lateral vs. crossed) and time to surgery.[5],[6] Brazilian orthopedic surgeons use cross-pin fixation in 70.7% of Gartland type II fractures and 74.8% of Gartland type III fractures, despite the risk of ulnar nerve injury.[7]

The aim of this study was to evaluate the influence of pin configuration and time to surgery on outcomes, measured by Flynn's criteria, 6 weeks after surgery for types II and III SCFs.

All medical records of pediatric SCF classified by Gartland as type II and type III and surgically treated from 2007 to 2017 were enrolled following the STROBE reporting tool. Multiple fractures and patients with insufficient data were excluded from the study. Standard treatment for this type of fracture is followed by all staff surgeons in the department. Closed reduction and pin fixation (two lateral divergent or crossed) were carried out under general anesthesia, followed by plaster immobilization with the forearm in a neutral position. Patients were discharged within 24 h after surgery. Follow-up visits took place at 7 and 15 days, postoperatively, with clinical and radiological evaluation. After 4 weeks, wires were removed and the plaster cast was left for another 2 weeks. Following cast removal, the elbow range of motion and carrying angle was measured, and physiotherapy was recommended until the patient was able to perform normal daily living activities.

The following parameters were recorded: date and time of trauma, age (years and months), gender, side of fracture, Gartland classification, preoperative neural deficit, associated injuries, compartment syndrome, pin configuration (lateral or crossed), time to surgery, duration of surgery, surgical complication (iatrogenic nerve injury and return to operating room) pin site infection, and range of motion at 6 weeks after surgery. When the exact time of trauma could not be determined, emergency screening time was used.

The unsatisfactory outcome was defined by Flynn's criteria for the functional and cosmetic assessment of SCF treatment: loss of motion >15° or carrying-angle loss >15°. The overall rating was considered the lower of two ratings, and cubitus varus was automatically classified as unsatisfactory.[8] To avoid loss to follow-up and the impact of missing data – and ensure a comparison between patients at the same stage – range of motion was measured 6 weeks after surgery, when all devices (pin and splint) had been removed.

Complications were described from a surgical perspective and defined as iatrogenic nerve injury and need of reoperation (unsatisfactory reduction or loss of reduction). Time to surgery was classified as early (a period of 8 h after trauma) or late (more than 8 h).

Inferential analysis based on Flynn's criteria was performed by Pearson's correlation coefficient or Fisher's exact test for categorical variables when indicated. For numerical variables, Student's t-test or Mann–Whitney U-test were performed according to Shapiro–Wilk normality test result.

One hundred and twenty-nine patients met the inclusion criteria. Mean patient age was 6.3 ± 2.5 years old, and 59.7% of the patients were males. The main mechanism of trauma was a fall from height (58.6%), and the majority of patients underwent surgery within 8 h (83.0%) after the injury. There were no cases of flexion-type SCF. Gartland type III fractures accounted for 57.4% of cases. There was no difference between Gartland type II and III fractures in terms of age (P = 0.576), duration of surgery (P = 0.133), and pin configuration (P = 0.123).

Satisfactory outcomes occurred in 60.5% of cases. According to Flynn's criteria, there was no difference in outcome between Gartland classification, pin configuration, and time to surgery. There was also no difference between demographic, trauma, and surgical characteristics, as summarized in [Table - 1]. 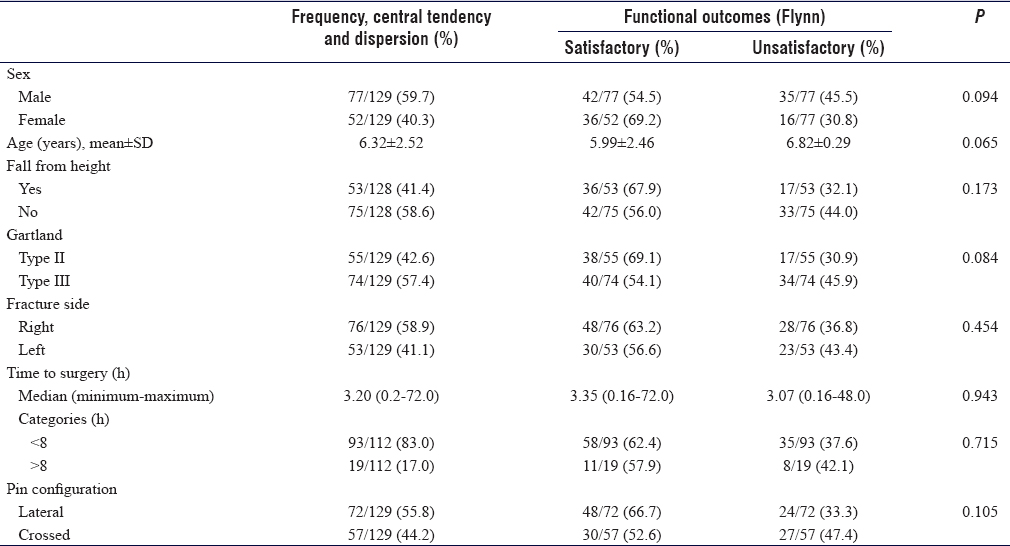 Seven patients had associated injuries. One with an absent radial pulse which returned after fracture reduction, four with radial nerve injuries, defined as neuropraxia which resolved spontaneously after a few weeks, and two patients had compartment syndrome caused by high-energy trauma requiring fasciotomy. All patients achieved complete clinical recovery. No case of anterior interosseous nerve (AIN) palsy was detected.

Eight patients (6.2%) had surgical complications, including 5 (3.9%) with loss of reduction and 3 (2.3%) with ulnar nerve palsy after cross-pin fixation. All cases underwent reoperation to improve reduction or change pin configuration from cross to lateral divergent pin configuration. There were no records of infection.

Flynn criteria are a common outcome measure used to assess SCF in children. Excellent results have been described in 84.8% of cases of Gartland type II and III fractures within 8–30 weeks after injury.[9] In contrast to those authors, the current study used Flynn criteria 6 weeks after surgery in all children to ensure a uniform comparison of criteria and to avoid the impact of loss to follow-up, a frequent occurrence in our setting. As a consequence of the short follow-up period, we found a lower overall percentage of satisfactory results (60.5%) compared to the literature, which is expected since an improvement in range of motion is expected within a few weeks.

To increase safety in cross-pin configuration, the ulnar nerve can be further protected not only by nerve palpation during medial pin insertion but also by making a small incision under direct visualization of the medial epicondyle.[12],[13],[14] In addition, it has been reported that many other strategies may reduce the incidence of iatrogenic ulnar nerve injury, for example, less elbow flexion, ultrasound-guided intervention, and intraoperative nerve monitoring.[15],[16],[17]

Time to surgery apparently did not influence functional outcomes, in agreement with other authors.[6],[19],[20],[21] The surgical procedure can be postponed to the next day in case of no pain after immobilization, intact soft tissues, and normal neurovascular status.[22] Therefore, it is recommended that these fractures are treated as the first case the next morning rather than late in the evening, when the staff may be more tired and prone to achieve less favorable results.[6],[23]

In a meta-analysis, Babal et al. reported AIN palsy and radial nerve palsy as the two most common peripheral nerve injuries in extension-type SCF at patient presentation.[24] However, our study did not identify any AIN lesion during the perioperative period, nor identified any motor deficit 6 weeks postoperatively. This may be explained by a lack of cutaneous sensory components in the AIN which makes identification of neural lesion more difficult at the time of patient arrival, and results in unnoticed cases of neuropraxia.[25]

One patient presented with an absent radial pulse which returned after fracture reduction. Chaturvedi et al. studied 21 consecutive closed pediatric SCF without any pulse, showing that peripheral pulse returned in 13 cases after reduction. Their study also demonstrated that capillary filling time and oxygen saturation are better prognostic markers than the peripheral pulse for pulseless limbs.[26]

This study has limitations. Its retrospective nature is the main limitation, with intrinsic susceptibility bias (selection bias). Finally, the follow-up period was relatively short. As a result, a lower percentage of satisfactory outcomes compared to the literature was found, especially since an improved range of motion is expected within a few more weeks.

A K-wire configuration and time to surgery do not influence functional outcomes after surgical treatment of SCF in children. Thus, a lateral fixation can be adopted to decrease the risk of iatrogenic ulnar nerve injury.

This study was approved by the local research ethics committee (Brazilian Certificate of Presentation for Ethical Appreciation N° 43707415.4.0000.5404).