Objectives: The present study aimed to identify barriers in conducting or completing research by orthopedic surgeons in Saudi Arabia. Methods: A short structured, validated online survey was distributed to all orthopedic surgeons registered as members of the Saudi Orthopedic Association (SOA) through e-mail. The survey consisted of demographic data of the survey participants, data related to their research, and six-barrier items based on a five-point Likert scale. The collected data were analyzed using appropriate statistical methods, and the level of statistical significance was defined as P ≤ 0.05. Results: Out of 1252 SOA local members, 152 participants responded to the survey with a response rate of 12.1%. Abandoning orthopedic research activities among the studied 152 participants was significantly related to insufficient time to conduct research, and limited access to funding (P < 0.0001). The long duration (>12 months) of research completion was significantly related to almost all studied barrier items. The most important predictors, using regression analyses, were insufficient time and fund support for abandoning research projects, while confidence in conducting research and support by a mentor were the most important predictors for taking a long time for research completion. Conclusion: A considerable amount of orthopedic research in Saudi Arabia is abandoned or taking a long time to complete because of barriers. Addressing and solving these barriers might help to improve the research activity among the Saudi orthopedic community.
Keywords: Barriers, mentors, orthopedic surgeons, research, Saudi Arabia, survey

Research is considered the basis of all fields of medical knowledge. However, many barriers and obstacles are faced by the researchers during each research journey.[1],[2] The research barriers should be recognized and tackled properly to unleash the researchers toward greater productivity and more evidence-based practice.[3] Several studies have been carried out in Western countries to identify the possible barriers facing health-care providers in the research conduction.[3],[4],[5],[6] Carter et al. reported that insufficient time, opportunities, and funding were the most prominent factors that suppress research activities among Australian orthopedic trainees.[7] Elliott et al. highlighted similar barriers constraining the orthopedic research activity in East Africa with some variability. In the latter study, barriers related to resource, institution, method, or process were the most important obstacles facing orthopedic researchers.[8]

Several reports have identified a relative paucity of research activity in the Middle East.[9],[10] The contribution of the Middle East toward orthopedic research is scanty compared to the rest of the world.[11],[12] The barriers to research among the orthopedic community in Saudi Arabia have yet not been investigated. The primary objective of the present study is to identify barriers to the conduction or completion of research among orthopedic surgeons in Saudi Arabia. The secondary objective of this study is to find practical solutions, which could subsequently enhance the orthopedic research activity.

A structured short online survey was designed to identify barriers affecting the conduction and completion of orthopedic research projects in Saudi Arabia. The research project was defined as any scientific work carried out by the participants with an intent of publication irrespective of the research purpose, whether it was for the sake of an academic degree or nonacademic purposes. The data were collected from November 2020 to January 1, 2021, through a self-reported survey. The inclusion criteria were all orthopedic surgeons according to their institutional ranking (residents, specialists, fellows, consultants, teaching assistants, lecturers, assistant professors, associate professors, and full professors) working in Saudi Arabia during the time of the study, irrespective of their nationality. A secure online platform (www.surveymonkey.com) was used to collect data. The web links were distributed electronically to participants through the Saudi Orthopedic Association (SOA), who were registered in the database of the association, along with an e-mail explaining the aims of the research. Ten days later, another e-mail reminder was sent to those that had not yet completed the survey questionnaire. Participation in this survey was voluntary. The privacy and confidentiality of data have been maintained by keeping it anonymous.

The survey was formulated according to the concept and findings of a previous recent validated qualitative survey by Carter et al. among Australian Orthopedic Association trainees.[7] Several items have been adapted based on local considerations. The authors (orthopedic surgeons) have reviewed the survey until consensus was achieved. The final form survey was in the English language and has been revised by an epidemiologist. The survey consisted of demographic data of the participants and data related to their research work. The demographic data included age, gender, current job title, place of work (or affiliation), number of publications, presentation of any research papers, the presence of research projects in progress (yes or no), the average duration of last completed research (total time of data collection, analysis, finalizing the manuscript for submission to journal/conference, and publication), and the number of last completely abandoned research projects before its completion, if exist. The barriers' variables in the survey were assessed using a Likert response scale from 1 to 5 (1 = strongly disagree, 2 = disagree, 3 = neutral, 4 = agree, and 5 = strongly agree). The participants were asked about six statements related to barriers to perform/complete research, including (1) availability of time, (2) mentorship, (3) fund, (4) academic incentives, (5) level of understating research methods, and (6) ethical board approval obtainability.

The collected data were analyzed using SPSS version 22.0., IBM Corp., Armonk, NY, USA. Data were presented using frequencies, means, and standard deviation as appropriate. The distribution of the studied participants according to their completely stopped research project before completion and their last completed research project was performed in relation to their demographic characteristics, research characteristics, and the studied barrier items using Chi-square test for qualitative variables and unpaired t-test for quantitative variables. Predictive logistic regression models based on the stepwise regression with a P = 0.05 as an entry criterion and a P = 0.10 as an exclusion criterion were also used to predict the most important barriers. The level of statistical significance was defined as P ≤ 0.05. 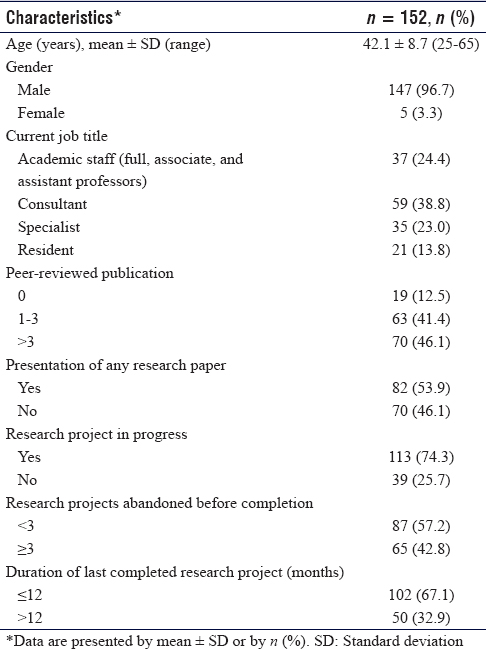 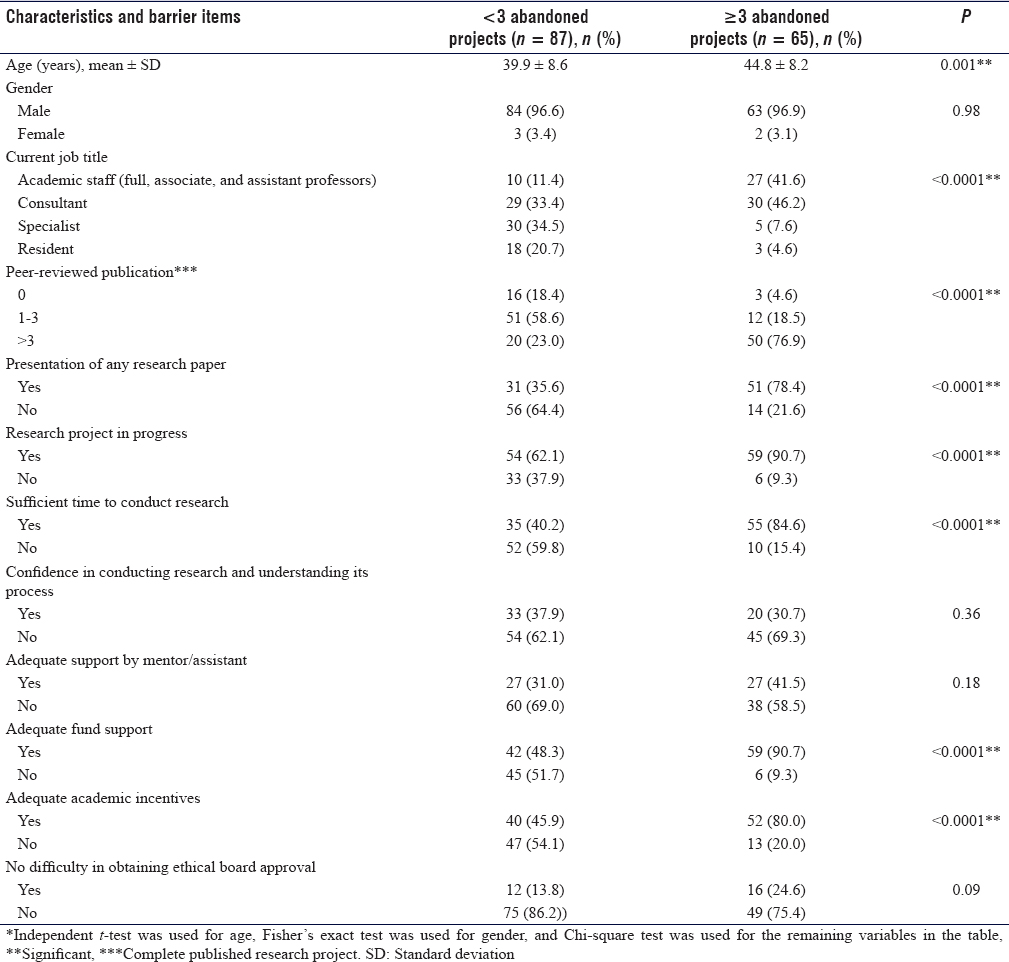 Table 2: Distribution of the studied surgeons by their completely abandoned research projects before completion and their characteristics and barrier items

In [Table - 3], the distribution of the studied participants is illustrated based on the duration of their completed research projects, their characteristics, and barrier items. They were more likely to take more time (>12 months) in research project completion if they had insufficient time to conduct the research (P = 0.04), no confidence in conducting research (P < 0.0001), no mentor/assistant support (P = 0.001), have limited access to funding (P = 0.01) if they have poor incentives (P = 0.001), and difficulty in obtaining ethical board approval (P = 0.01). 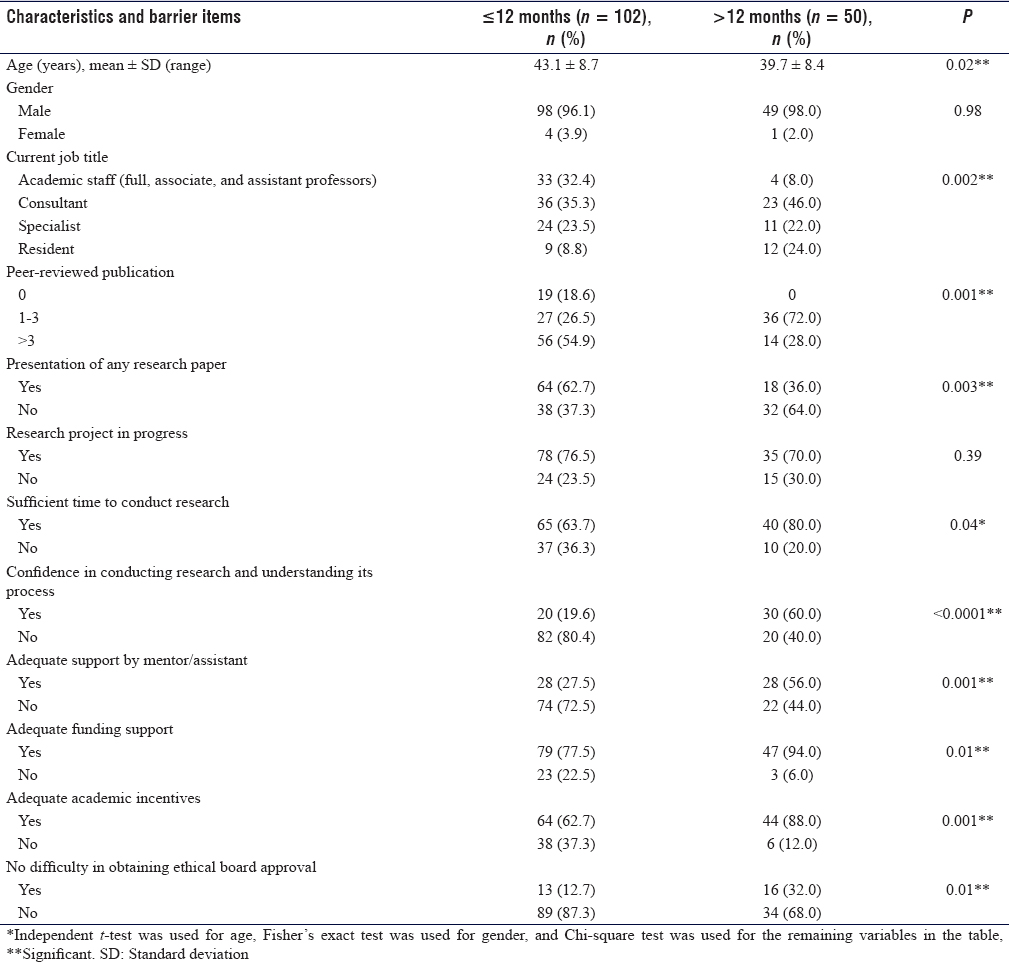 Table 3: Distribution of the studied surgeons by the duration of their last completed research project and their characteristics and barrier items

The study findings showed that 65 of the participants (42.8%) had abandoned ≥3 of their research projects before completion, and this was significantly related to insufficient time, lack of funding, and adequate academic incentives. The long duration (>12 months) of research completion was significantly related to almost all studied barrier items. The most important predictors, using regression analyses, were insufficient time and fund support for abandoning research projects, and confidence in conducting research and support by a mentor for taking a long time for research completion. Similar findings were reported by Carter et al., where the studied orthopedic trainees were more likely to abandon their research project if they did not have enough time to complete their assignments and if they did not have funding support.[7] A previous Saudi study by Mitwalli et al., which included 191 physicians and residents in Riyadh hospitals, concluded that the most noticeable barriers in performing research were lack of training on research, lack of time, and lack of mentors.[13] The absence of enough support by mentors or assistants has been found as a major barrier in conducting research, particularly among medical students and junior researchers.[14],[15] In fact, trainees enrolled in the Saudi orthopedic residency program are required to conduct a research project as an integral part of their curriculum. The latter point has not been explored in-depth in this study.

Elliott et al. conducted a study among 21 orthopedic academic surgeons in East Africa, where they concluded that the most important barriers in conducting orthopedic research projects were the lack of resources and understanding of the research process.[8] Overall, the most frequently cited barrier in conducting research was lack of funding that also has been pointed out as a barrier to orthopedic research in the United States.[8],[16] As musculoskeletal diseases receive less public health attention in comparison with infectious diseases, this could influence the subsequent lack of institutional support for orthopedic research.[8]

Our study findings emphasized the positive role of the incentive rewarding system and its influence on researchers' productivity. On the other hand, Guraya et al. detected research activity regression among full professors following achieving the highest level of academic incentives.[17] El-Sobky advocated that governments and higher authorities should pay more attention to the research environment. Countries with poor research settings could be expelling to the local talented researchers, known as “brain drain” phenomenon.[11] In fact, the recent investment of the Saudi government in higher education and research has led to better research outcomes.[10],[18]

The strengths of this study include that it is the first study to assess the barriers of conduction and completion of research projects among orthopedic surgeons in Saudi Arabia according to the authors' best available knowledge. The barrier items were formulated according to the findings of a recently published qualitative study and analyzed in quantitative nature based on a five-point Likert scale.[7] No missing nor aberrant data were found in the study database. Furthermore, the use of predictive regression models helped testify and quantify the most significant predictors implicated in stopping or completing orthopedic research projects.

The limitations of the present study included a modest sample size, which may become a nucleus for further studies. Types of abandoned research projects have not been explored in-depth in the study. The type of publications and ranking of journals were also beyond the scope of this paper. Moreover, unintentional amplification of the results may occur due to reporting for two surgeons working on the same project. Due to the paucity of this type of studies in the literature, it is possible that other barriers may not have been included and analyzed in this study. Adding an open-ended question could have helped to address such a limitation. Future studies should include a larger sample size to examine the extent to which the results of this study are generalizable.

All in all, a high proportion of the studied orthopedic surgeons stop their research projects and take a long time to complete them because of barriers. Dissemination of these findings to the Saudi orthopedic community is crucial to improve their research activity and finding solutions for the most important barriers preventing research production and completion.

An ethical approval has been granted from the scientific research ethics committee at the College of Medicine at Taibah University, Almadinah Almunawwarah, Saudi Arabia, under study ID number 021 – 1442 on October 26, 2020.

We thank the Saudi Orthopedic Association (SOA) for help distribute the survey and to all Saudi orthopedic surgeons who participated in this study.

This research did not receive any specific grant from funding agencies in the public, commercial, or not for profit sectors.

There is no conflicts of interests.

YA is the principal investigator of the study, responsible for and main contributor to all phases of the study: the study concept, design, data collection, literature review, ethical board review application, and the manuscript modification throughout the whole process. HA contributed to data collection, data analysis, drafting, and critical analysis of the manuscript. Both authors have critically reviewed and approved the final draft and are responsible for the manuscript's content and similarity index.