Objectives: The objectives of this study were to highlight the factors that influence orthopedic trainees in Saudi Arabia to choose their subspecialties and to determine the most desired residents' subspecialty and the percentage of residents who are planning to pursue a fellowship program. Methods: We formatted an online questionnaire using a Likert-type scale. The survey contained 21 questions. The study was conducted in multiple cities in Saudi Arabia. The survey was distributed to orthopedic surgeons. We used WhatsApp Messenger, which is the most popular texting application in Saudi Arabia and the most guaranteed method to ensure that more participants would answer the survey. The survey was closed after 4 weeks for data analysis. Results: The number of surgeons included in this study was 108 out of 175 contacted, including residents, fellows, and consultants. Overall, personal interest in a specialty and a patient's prognosis were the most influential factors that motivated surgeons to choose their careers, while lack of competition was the least important factor. For the 37 (90.2%) residents who chose to continue their training, pediatric orthopedics (26.8%) and foot and ankle surgery (14.6%) were the most desired subspecialties whereas sports medicine (7.3%) and oncology (0%) were the least. The female doctors represented 5.6% among orthopedic surgeons included in our study. Conclusion: Orthopedic residents must be guided to the subspecialties needed in their communities as the fact that general orthopedics is disappearing very soon from clinical practice in tertiary care hospitals in big cities of Saudi Arabia.
Keywords: Career choice, fellowships and scholarships, female, orthopedic surgeons, Saudi Arabia, specialization

The pursuit of orthopedic fellowship in Saudi Arabia has become increasingly popular over the past several years. Because of the rapidly transforming health-care system toward subspecialization, the residents appear to have different critical factors to remember when choosing their careers. Most orthopedic surgery residents elect to continue their training; however, many factors may affect their choice, and these factors are not adequately recognized.[1]

Nowadays, joining a fellowship program in Saudi Arabia has become more difficult. There is a significant increase in the number of medical graduate students since 1999, as we have now more than 25 medical schools compared to only four medical schools then. At the same time, we have limited seats in the only three main orthopedic training programs in Saudi Arabia.[2],[3],[4]

Like many other surgical specialties, orthopedics has increasingly trended toward subspecialization.[5] There are many factors, including market pressure, the pursuit of scholastic purposes, improvement of surgical and clinical experience, excellence outcome and lifestyle considerations, colleagues' advice, and institutional requests, that increase the proportion of orthopedic surgeons to continue their postgraduate training.[1],[6]

The goals of our study were to identify the factors that guide orthopedic surgeons to choose their subspecialty and to determine the most desired residents' subspecialty and the percentage of the residents who are planning to join a fellowship program.

This cross-sectional study was conducted in the Department of Orthopedic, College of Medicine, King Saud University, Riyadh, Saudi Arabia, during the period from October 2017 to April 2018.

We formatted an online questionnaire using a Likert-type scale. The survey consisted of 21 questions, including personal data, level of training, a specialty of interest, and 15 influencing factors. Before distributing the survey, we did a pilot study on convenience samples of 26 orthopedic surgeons at King Khalid University Hospital, and the questionnaire was validated by the investigator support unit at King Saud University.

The study was conducted in multiple cities in Saudi Arabia. We distributed the survey to Saudi orthopedic residents, fellows, and consultants from the database of the Saudi Orthopedic Association and the Residency program of the Saudi Commission for Health Specialties. As the E-mail addresses were not available, we used “WhatsApp Messenger,” which is the most popular application for texting in Saudi Arabia and the most guaranteed method for the survey to reach more participants. The survey was closed after 4 weeks for data analysis.

The number of surgeons included in this study was 175 (the number of orthopedic surgeons with contact number in the database of the Saudi Orthopedic Association and the Residency program of the Saudi Commission for Health Specialties), including residents, fellows, and consultants [Table - 1]; 108 of 175 surgeons have completed the survey (61.7% response rate). The mean age of the participants was 35 years (SD, 7.8 years). Most of the respondents (n = 86, 79.6%) were married. The number of residents in our study was 41, and all of them were Saudi; only 4 (9.8%) chose not to pursue a fellowship program and go into general orthopedic practice, while 37 (90.2%) residents decided to continue their training and pursue a fellowship program.

Table 1: Characteristic of the participants

Our result listed 15 factors that might influence the participants' decisions in choosing a subspecialty [Figure - 1]. It was found that the most important influencing factor among our orthopedic surgeons' sample in selecting a subspecialty was a personal interest in the specialty (with an average score of 4.46), followed by treated patient's prognosis (4.34), and the least influential factor was lack of competition (3.16).

We also classified the results for the 15 influencing factors according to the level of the surgeons who participated in the study: residents, fellows, and consultants [Table - 2]. The data showed that the overall scores of the influencing factors are significantly different (P < 0.05) between the residents, fellows, and consultants. The residents considered a patient's prognosis as the most important factor in choosing a subspecialty, while advice from friends, family, or colleagues was the least important. On the other hand, the fellows and consultants reported that a personal interest in a subspecialty came first when choosing their careers, whereas a lack of competition was the lowest factor affecting their choices. 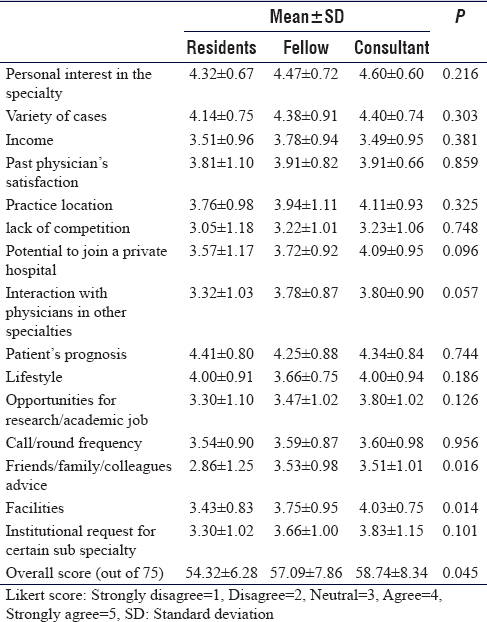 Table 2: Mean of the score for influencing factors according to the level of the surgeons: residents, fellows, and consultants

According to the residents, the subspecialty with the highest interest to join in the future is pediatric orthopedics (26.8%), followed by foot and ankle surgery (14.6%) and arthroplasty (12.2%), while trauma, upper extremity, and spine (9.8%) were equally selected. Sports and oncology were the least selected specialties (7.3% and 0%, respectively) [Figure - 2].

Furthermore, we asked fellows and consultants if they were satisfied in their careers. The satisfaction rate demonstrated that 57% of the surgeons were strongly satisfied [Figure - 3]. Furthermore, the results showed that female doctors represent 5.6% among the orthopedic surgeons included in the present study.

Nowadays, the trend of subspecialization is increasing.[5] In this study, 90.2% of the residents stated that they were planning to continue their training and join a fellowship program. Gaskill et al.[10] reported that pursuing a fellowship program in the US became popular in the 1970s, and the percentages of general orthopedics decreased from 44.2% to 28.7% between 1990 and 2006. Another study[11] concluded that the overall proportion of fellowship applicants from graduating orthopedic residents was 76% in 2003 and increased to 90% in 2013. Furthermore, two studies reported that more than 90% of the residents were planning to enroll in a fellowship program.[12],[13]

Our data showed that the influencing factors are significantly different (P < 0.05) between residents, fellows, and consultants. Fellows and consultants stated that personal interest in the specialty comes first when choosing their career, whereas the lack of competition was the lowest factor affecting their choice. On the other hand, the residents considered the treated patient's prognosis as the most crucial factor in choosing a subspecialty, whereas friends, family, and colleagues' advice was the least important.

Kavolus et al.[1] reported that intellectually stimulating subspecialty and variety of cases were the highest ranking factors by residents, whereas a residency program with a strong tradition of placing in a particular subspecialty had the lowest average score. Niesen et al.[14] conducted a study where they asked the residents to select from ten listed criteria in order of importance, where surgical experience and autonomy, followed by staff members, were the most important factors and research resources and salary ranked as the least important. Furthermore, a study done on fellows of a foot and ankle subspecialty[15] showed that the relationship between the consultants at their residency program was the primary catalyst to choose the foot and ankle subspecialty as a career.

Orthopedic surgery is a spectrum of many divisions that extend from general orthopedic to differently specified subspecialties. The result of our study shows that residents had high interest in pediatrics (26.8%), followed by foot and ankle (14.6%) and arthroplasty (12.2%). However, sports and oncology were ranked as least wanted specialties with the rate of 7.3% and 0%, respectively. With regard to why there is low interest in sports medicine as a subspecialty, it is maybe due to the increased number of surgeons specializing in sports medicine in Saudi Arabia. Moreover, regarding oncology, the unfavorable outcome with high expenses of treatment modalities and the need for a particular setup during treatment of bone tumor cases makes this subspecialty less favorable. On the other hand, Hariri et al.[13] conducted a study on US orthopedic residents and showed a contradicting conclusion that the sports medicine (28%) was the most desired specialty whereas pediatric orthopedics (8%) was one of the least. Furthermore, Kavolus et al.'s and Niesen et al.'s studies[1],[14] both reported that sports medicine was the most desired specialty whereas oncology was the least.

In our study, the female percentage was 5.6%. A study conducted in four countries of the Gulf Cooperation Council – Saudi Arabia, Bahrain, Oman, and Kuwait – showed that females represent 14.6% in all four countries.[16] In the USA, females in orthopedic residency program are less in comparison with male residents, where the female residents account for no more than 15%.[17] However, females who apply for orthopedic fellowships range from 7% to 10% annually. The proportion of the match rate for female applicants (91%–99%) is higher than that of male applicants (79%–86%).[18] Another study conducted in the USA reported that of 360 orthopedic trainees, 85.5% were male and 14.5% were female.[1] Furthermore, a significant gender preference for orthopedic surgery is observable among male medical students.[9]

The limitations of our study are the relatively small sample size (although the survey was short and taking no more than 2–3 min), the time dependency, and the conclusions may change later on.

The study protocol was approved by the Ethical Review Committee of the College of Medicine Research Centre, King Saud University, Riyadh, Saudi Arabia.

The authors are thankful to the Investigator Support Unit of Prince Naif Health Research Center at King Saud University for their facilitation in the Statistical analysis.

KAB and NAA conceived and designed the study. NAA, AAA, and AMA reviewed the literature, collected, and organized the data. KOA and NAA wrote the initial and final draft of the manuscript. All authors have critically reviewed and approved the final article and are responsible for the content and similarity index of the manuscript.