Objectives: Children with flatfoot are more vulnerable to have foot pain, foot injury, stress fractures, knee pain, and poor exercise performance. Some children may not experience any of these symptoms and the only predominant complaint would be foot pain. Flatfoot is considered a health issue that was not studied well in Saudi Arabia. The study aims to determine flatfoot prevalence among school-age children 7–14 years in Almadinah Almunawwarah and to know the effect of age, gender, and body mass index on the prevalence of flatfoot. Furthermore, a secondary aim is to find if there is a relationship between flatfoot and postactivity foot pain and participation in sports.
Methods: This is a cross-sectional analytic study conducted on children aged 7–14 years living in Almadinah Almunawwarah, Saudi Arabia. Flatfoot was diagnosed using Staheli's Plantar Index. Binary logistics regression was used to predict the likelihood effect of sociodemographic data among children with flatfoot.
Results: A total of 403 children had been voluntarily recruited in this study. Boys were 193 (47.9%) while 210 (52.1%) were girls. The prevalence of flatfoot was 29.5% (119), 96.6% of them were flexible flatfeet and a relatively very low incidence (3.4%) of rigid flatfeet. Age has a significant relationship on the prevalence of flatfoot (P = 0.050) where 7–8-year-old group was rated highest among other age groups in the prevalence of flatfoot.
Conclusion: We found 29.5% of the children had flatfoot in the study sample. This prevalence is still high in comparison to developed countries. Furthermore, this study found a significant association between age and flatfoot in children.
Keywords: Children, flatfoot, plantar index, prevalence, risk factors, Saudi Arabia

Flatfoot (pes planus) is a common condition.[1] It is diagnosed when the foot has a low or no longitudinal arch during weight-bearing. Around 90% of all clinical visits related to feet problems in children are due to flatfeet. It rarely causes disability but still stays one of the main concerns for the parents and grandparents.[2] In fact, it is a problem consisting of a group of physical features that include extreme eversion of the subtalar complex during weight-bearing, with plantar flexion of the calcaneum in relation to the tibia, plantar flexion of the talus, abduction and dorsiflexion of the navicular, abduction of the forefoot, and valgus posture of the heel.[3],[4]

There are two major types of flatfeet as follows: flexible flatfeet (FFF) and rigid flatfeet. FFF begins in childhood and continued into adulthood and usually affects both feet. It is the most common type. The term flexible defined as a medial longitudinal arch of the foot that collapses in various degrees when standing and returns to normal if the foot is not weight-bearing.[5]

There are many causes of flatfeet, causes of FFF include accessory navicular bone, generalized ligamentous laxity, neurologic disorders (cerebral palsy and hypotonia), muscular abnormalities (muscular dystrophy), genetic syndromes (osteogenesis imperfecta, Down syndrome, and Marfan's syndrome), collagen disorders such as Ehlers–Danlos, and other biomechanical causes such as ankle equines and valgus deformities. On the other hand, most rigid flatfeet are related to underlying pathology, including trauma, iatrogenic, tarsal coalition, congenital vertical talus, and peroneal spastic flatfoot.[6],[7],[8]

Children with flatfoot are more vulnerable to have foot pain, foot injury, stress fractures, knee pain, and poor exercise performance. Some children may not experience any of these symptoms, and the only predominant complaint is foot shape or the fact that they get fatigued easily.[9]

There are four methods that can be used to diagnose flatfoot, including (a) visual inspection,[10] (b) anthropometric values,[11],[12] (c) footprint parameters,[13] and (d) radiographic techniques.[14],[15] Many studies have been conducted worldwide about the prevalence of flatfeet in children. Many of these studies have determined the relationship between the prevalence of the flatfeet and the body mass index (BMI), age, and gender. Pourghasem et al.[16] found that obesity is one of the significant factors that cause an increase in the prevalence of flatfeet. A Nigerian study found that about one in every five children (6–10 years old) would be diagnosed with flat foot anomaly, and obesity further increased the risk.[17] Vergara-Amador et al. performed a study in Colombia and found a relationship between flatfoot with age, gender, and BMI. However, male gender and obesity were considered as risk factors.[18] Another study was in Taiwan also approved the relationship between flatfoot prevalence and obesity.[19] A study performed in China on children 6–13 years old exhibited that occurrence of FFF is directly proportional to BMI and the height, but it decreases with age.[20] A study done in Pakistan showed that flat foot was more common in males.[21] The previous studies showed a positive correlation between increased BMI, male gender, and flatfoot. In addition, they stated that flatfeet prevalence decreased with age.[16],[17],[18],[19] There was another study done in Iran that showed there was no gender difference in the flatfoot prevalence.[22]

Flatfoot is a health issue that was not studied well in Saudi Arabia at school-age children.

This study aims to determine flatfoot prevalence among school-age children (7–14 years old) in Almadinah Almunawwarah and to know the effect of age, gender, and BMI on the prevalence of flatfoot. Furthermore, to find if there is any relationship between flatfoot and postactivity foot pain and participation in sports.

A cross-sectional analytic study was conducted in various summer schools distributed within Almadinah Almunawwarah, Saudi Arabia, on children (7–14 years old) from May to July 2018.

The sample size was calculated and found to be 384. After obtaining informed consent from parents or legal guardians and explaining the objectives of the study, an interview with each child was started using a structured data collection sheet, which was directed by the investigators. The data collected included age, gender, participation in sports, history of pain in the foot and ankle after physical activity, weight, and height (BMI was calculated).

A tiptoe standing test was done for each child with flatfoot from the footprint test to differentiate between FFF and rigid flatfeet. If the arch appeared and heels were turned into varus, then it was considered a FFF, if not, it was considered a rigid foot.

Our inclusion criteria were age between 7 and 14 years and living in Almadinah Almunawwarah city. Exclusion criteria were neuromuscular patients, congenital anomalies in the lower limb, and history of surgery, fracture, and dislocation in legs or feet. Furthermore, young children who could not answer the pain questions and were not accompanied by their mothers were excluded from the study.

The statistical analysis was performed using the Statistical Package for the Social Sciences (SPSS), version 22.0 (IBM, Armonk, New York, USA). The Chi-Square analysis was applied to compare the differences between the groups included in the study, and P < 0.05 was considered statistically significant. 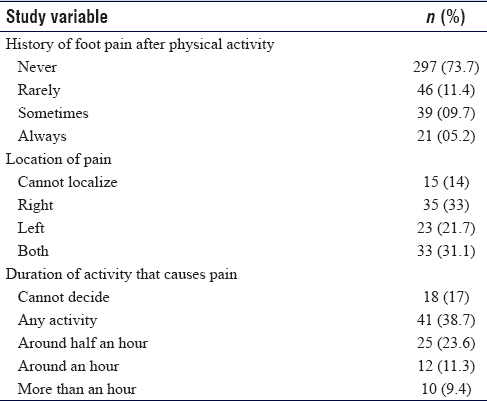 [Table - 2] shows the prevalence of flatfeet among the study participants.

Age was found to have a significant relationship to flatfoot (P = 0.050) where 7–8 years group was rated highest among other age groups in the flatfoot category while 13–14 was more in the normal foot category. Gender, classification according to BMI, participation in sports, and history of foot pain after physical activity showed no significant relationship to flatfoot [Table - 3]. 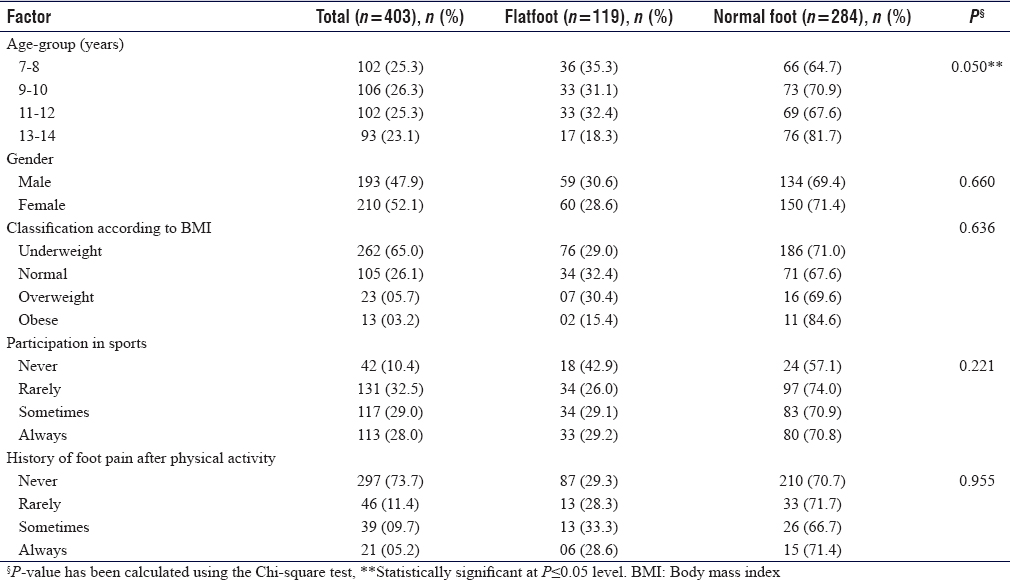 Table 3: Relationship between sociodemographic data of children and flatfoot category

We faced some limitations while conducting this study such as there was inconsistency in evaluation methods and definitions of flatfoot used by other studies, also the foot pain was very subjective, which was based on children description. Finally, lack of prior studies to compare with on the same topic and same age group in our region.

We found 29.5% of the children in our sample from Almadinah Almunawwarah had flatfoot. This prevalence is still high in comparison to those of developed countries. Furthermore, this study found a significant negative association between age and flatfoot.

The study received ethical approval from the Research Ethics Committee at the College of Medicine, Taibah University, Almadinah Almunawwarah Saudi Arabia, and the ID is 055-1439).

The authors gratefully acknowledge the help of the following medical students as data collectors: Rahaf Mohammed Alharbi, Nosaiba Saleh Alharbi, Sarah Abdulmohsen Almuzaini. We also, would like to thank everyone who participated in this study.

AMA, FFA, OAA, AHA, MMO, OAA and KIK conceived and designed the study, conducted research, provided research materials, and collected and organized data. All the authors analyzed and interpreted data. All authors wrote initial and final draft of the article and provided logistic support. All authors have critically reviewed and approved the final draft and are responsible for the content and similarity index of the manuscript.