Objectives: Hallux valgus (HV) is a common forefoot deformity encountered in orthopedic clinics. Little is known about the condition in Saudi Arabia due to the deficiency of studies investigating its characteristics in the general population. Epidemiological studies documenting HV prevalence are of paramount importance. This study aimed to estimate the prevalence of HV and identify its characteristics among the Saudi population residing in the capital city, Riyadh. Methods: An interview-based and self-reported cross-sectional study was conducted at four commercial centers and three universities in Riyadh, Saudi Arabia. Data were collected between December 2017 and February 2018. For estimation of the prevalence of HV, the Manchester scale was used. Multivariate logistic regression was used to test the relationship between HV and possible risk factors. Bivariate analysis, using cross-tabulation, was used to identify the odds ratios (ORs) of HV and Chi-square to calculate statistical significance. Results: A total of 420 participants (140 males and 280 females) were included in the study. The overall prevalence of HV for all participants was 43% (n = 181). The prevalence of HV in males and females was 30.7% (n = 43) and 49.2% (n = 138), respectively. Severe degree of HV was noted in 0.95% of the participants. The incidence of HV was more prevalent in participants who reported a positive family history (OR = 2.144; P = 0.001), big toe pain (OR = 2.97; P = 0.001), and female gender (OR = 2.039; P = 0.003). Conclusion: In the Saudi Arabian population, HV is a prevalent foot deformity that is associated with big toe pain, positive family history, and female gender.
Keywords: Bunion, foot, hallux valgus, orthopedics, prevalence

HV is associated with a marked reduction in foot-specific and general health-related quality of life as the severity of the condition increases.[5],[10] This indicates that HV is a disabling and significant musculoskeletal condition, which might require intervention to correct the deformity or slow its progression.[5],[10],[11]

Multiple risk factors have been associated with HV including, but not limited to, age, female gender, pes planus, genetic factors, footwear, big toe pain, nodal osteoarthritis, and self-reported osteoarthritis.[4],[11],[12] The etiological mechanisms, however, responsible for the development of HV may differ between males and females. In males, HV is associated with higher body mass index (BMI) and pes planus. Whereas, in females, it is associated with lower BMI and wearing high heels during adulthood and middle-age years.[12]

Women tend to wear shoes with a broader toe box and lower heels as they get older.[13] Wearing shoes with narrow toe boxes for younger women might predispose them to exert direct pressure on their first metatarsophalangeal joint.[14] Wearing constrictive footwear, high heels, and extremely narrow toe box between the ages of 20 and 29 years is common among females and might be responsible for developing HV later in life.[15],[16]

It is evident that there is a scarcity of studies and epidemiological data on HV in Saudi Arabia, making it difficult to measure the impact of the deformity. Considering the varying and high prevalence rates of HV across the populations, national data concerning the estimated prevalence of HV in each population are necessary.[17] The main aim of this study is to provide an estimate of HV prevalence, report its characteristics, and identify its possible associations among the general Saudi population residing in Riyadh.

To obtain a representative sample of the general population living in Riyadh, Saudi Arabia, a cross-sectional study was conducted at four commercial centers and three universities located in different geographical areas. Riyadh, the capital city of Saudi Arabia, has a population of around 6.5 million people, with Saudis representing around 64.19% of the total population.

Adult Saudis living in Riyadh were included in the study. The exclusion criteria were non- Saudis, young participants (defined as <15 years), and participants with a documented previous foot trauma and/or surgery.

Convenience sampling technique was used for this study. Data were collected from December 2017 to February 2018. To estimate the prevalence of HV among Saudis, participants were given the Manchester scale and were asked to choose one out of four pictures most closely resembled their feet [Figure - 1].[18]

The data were coded and entered into IBM SPSS (version 23, IBM corporation, Armonk, New York, United States). Descriptive statistics were used to present the prevalence-related data, including footwear during childhood and family history. These are presented as frequencies and percentages. The mean and standard deviation were calculated for numerical variables such as age, weight, height, and BMI. 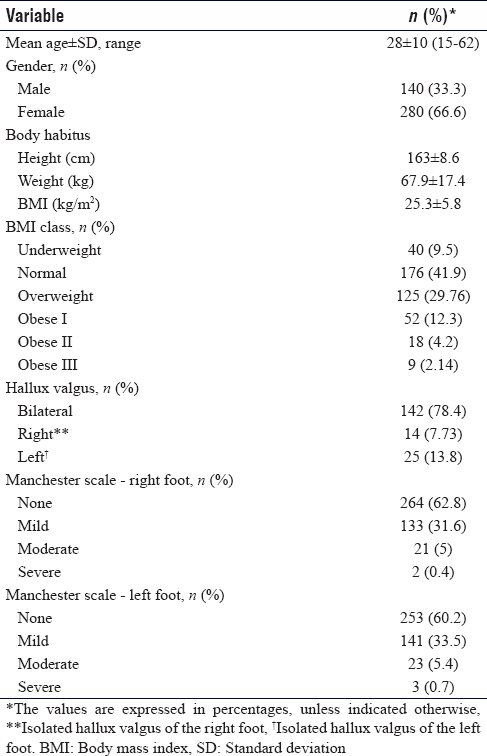 Around 13% (n = 55) of the participants reported big toe pain, especially in the medial side of the big toe. Importantly, most participants (n = 32; 58.1%) reported that they experience big toe pain when walking. Around one-third of the patients with big toe pain (n = 15, 27.2%) were experiencing symptoms at rest. Around 32.3% of the entire sample (n = 136) reported having a family member with HV. Siblings were mostly affected by HV, followed by the mother, father, grandmother, and grandfather. Most participants reported more than one family member with HV. Details of big toe pain and family history are listed in [Table - 2]. 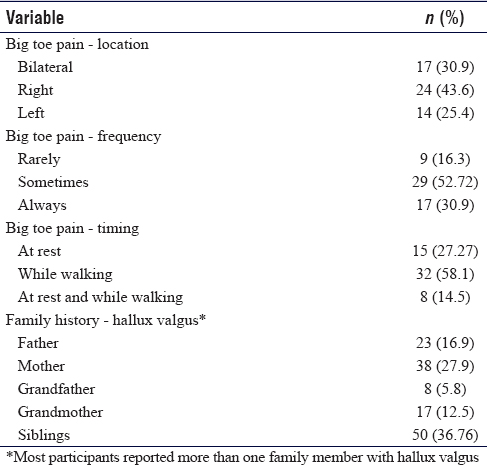 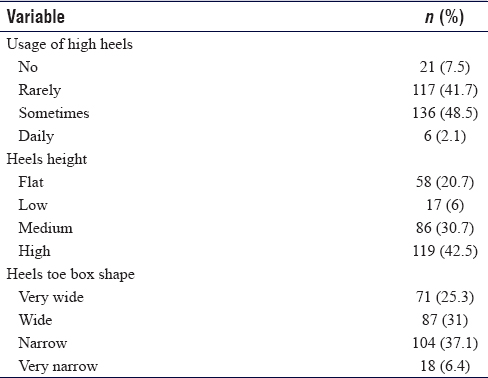 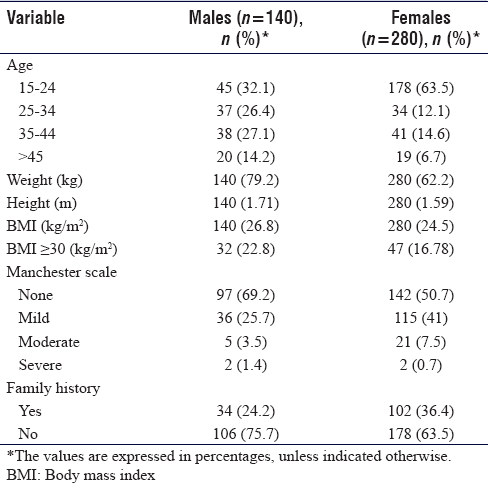 Table 4: Detailed comparison in characteristics between male and female participants

A multivariate analysis was performed using logistic regression to identify the OR of age, gender, BMI, big toe pain, family history, usage of high heels, big toe box shape, and footwear during childhood. [Table - 5] lists the OR of possible factors contributing to the development of HV. 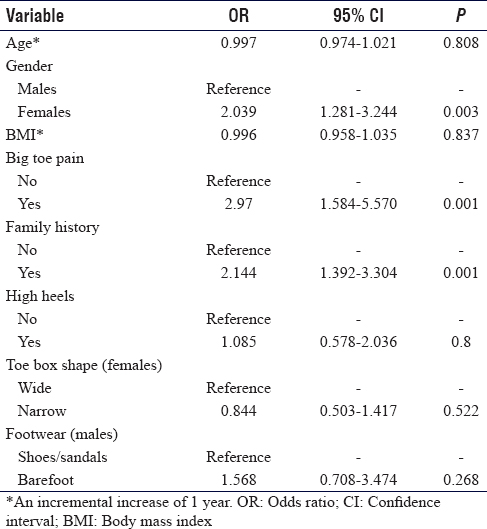 Wearing high heels with narrow toe box did not seem to have a statistically significant impact on the development of HV among the participants. Furthermore, two-thirds of the participants (n = 37/55) who reported big toe pain had HV, which translates to an OR of 2.97 (P = 0.001). Using the Manchester scale, the estimated prevalence of HV for all participants is 43% (n = 181/420). The prevalence of HV is close to what has been reported by Al-Abdulwahab and Al-Dosry in Saudi Arabia 19 years ago, indicating that HV is a common deformity in the general population.[16]

Big toe pain is significantly associated with HV,[21] possibly because the participants were young females and pain was caused by walking and intense exercises, which put greater strain on their feet.[3] Therefore, HV should be investigated among females who report big toe pain to identify and address the condition at an early stage.[3] Although big toe pain was associated with HV, pain in other body regions was more likely to be reported as well, such as the knee, lower back, hip, and foot pain.[11]

Pain intensity in HV does not significantly correlate with the degree of HV angle. Therefore, foot pain should always be assessed in the context of general health and physical activity engagement for the patient.[22]

Wu and Louie concluded that wearing high heels does not predispose females to develop HV in the Chinese population. Family history, however, was the major risk factor for developing HV.[25] The conclusion of Wu and Louie is consistent with the findings of the present study. In contrast, Hong et al. stated that wearing high heels negatively affects muscle coordination and increases muscle loads on the lower back and lower extremities, especially the quadriceps and erector spinae muscles. This, in turn, causes muscle fatigue and predisposes people to increased risk of injury. Wearing flat shoes or lowering the height of the high heels is one of the best methods to decrease the chances of injuries.[26]

Gait parameters tend to be affected by HV deformity, which in turn, predispose people with HV to develop increased mediolateral postural sway.[27],[28] For instance, there is a reduced rearfoot supination, ankle dorsiflexion, and early onset of intrinsic muscle activity, especially at heel strike. Consequently, elderly individuals might have a less stable gait, especially when walking on irregular surfaces.[27],[28] Hurn et al. reported that there are no significant differences in postural sway, muscular strength, and gait parameters in adults with a mild degree of HV as compared to the control group. Earlier intervention, therefore, may prevent further progression of the deformity to “severe HV” that might impair gait parameters.[29]

In Saudi Arabia, a study was published in 2000 by Al-Abdulwahab and Al-Dosry, which investigated HV and the preferred shoe types among 100 young healthy female college students.[16] To our knowledge, their study was the first of its kind that investigated the prevalence of HV in Saudi Arabia. The study reported that bilateral HV was present in 39% of the participants, 20 participants of which reported tenderness or pain in the foot.[16]

Finally, there are a few limitations that need to be acknowledged regarding the current study. Pes planus was not investigated as a possible association of HV due to the difficulty of clinically examining pes planus and assessing its severity in the general population. Big toe pain could not be differentiated from other conditions causing pain such as first metatarsophalangeal joint (MTP) joint degeneration, gout, rheumatoid arthritis, sesamoid conditions, osteochondral problems, or associated hallux rigidus. The study was cross-sectional and was performed in a convenience sampling technique. All participants were interviewed in an urban setting, that is, commercial centers and universities. This likely represented a higher socioeconomic class and lacked participants from rural areas. The method of data collection was participant based and was prone to recall bias. However, numerous efforts have been undertaken to overcome the obstacles in the study. In spite of these limitations, the current study highlighted the importance of investigating HV prevalence, characteristics, and its associated risk factors from an epidemiological perspective. To the best of our knowledge, this is the largest study, conducted in Saudi Arabia, estimating the prevalence of HV and identifying its associations.

HV is a prevalent foot deformity in the general Saudi Arabian population residing in Riyadh. Positive family history, female gender, and big toe pain are greatly associated with HV. No statistically significant association could be established between HV and BMI, high heels, and toe-box shape. Further studies are required to identify, assess, and screen for possible associations in the general population.