Objectives: Hallux valgus is one of the common causes of foot pain and deformity in the adult and adolescent population with multiple possible causes. Surgical correction with the opening proximal wedge osteotomy using low-profile plate system (LPS) fixation has been gaining popularity in the recent literature. This study report results from a case series of feet with hallux valgus corrected utilizing open proximal wedge osteotomy using LPS fixation. Methods: This was a retrospective case series of 12 consecutive patients (14 feet). All surgeries were done by a single orthopedic surgeon. A proximal wedge osteotomy using Arthrex opening wedge LPS fixation was done to all patients. Follow-up was 3 years minimum except for four patients who were lost to follow. Patient subjective satisfaction, radiographic assessment, and physical examination were reported. Results: The overall satisfaction was at 100% of followed patients. Shoe wear and foot shape were improved in 11 feet, and 12 had postoperative pain improvement. Mean preoperative hallux valgus angle (HVA) and intermetatarsal angle (IMA) were at 30.07° and 12.36°, respectively. Postoperatively, the mean HVA and IMA improved to 13.36° and 6°, respectively (P < 0.001). All followed patients showed complete healing. Conclusion: The opening proximal wedge osteotomy with a LPS fixation has a high overall satisfaction by patients and is preferred by surgeons, which stems from its straightforward technique, which makes the technique an attractive option for correcting the hallux valgus deformity.
Keywords: Bunion, hallux valgus, low-profile plate, opening wedge plate, personal satisfaction, proximal wedge osteotomy

Hallux valgus is one of the common causes of foot pain and deformity in the adult and adolescent population. It is defined as a lateral deviation of the great toe with medial deviation of the first metatarsal bone.[1] The female-to-male ratio is 2:1 with a reported prevalence of 2%—4%.[2] Although it is not clear, possible causes may include footwear, namely high heel shoes that have a narrow toe box and genetic predisposition. Other causes of hallux valgus include rheumatoid arthritis, connective tissue disorders, and cerebral palsy.[3] Patients with hallux valgus mainly present with pain as the primary complaint. Nevertheless, complaints may include difficulty wearing specific footwear and undesirable appearance.

Hallux valgus is classified into mild, moderate, and severe [Table - 1]. Trethowan, in 1923, was the first to describe the proximal opening wedge osteotomy using the resected medial first metatarsal eminence as a structural autogenous bone graft.[4] In the literature, the use of the opening wedge osteotomy has been limited and reasonably objectionable due to its technical limitations and its potential complications. Moreover, the need for structural bone graft and the inability to achieve stable fixation resulting in fear of osteotomy fracture, malunion, or nonunion contributed to its limited use.[5]

In recent years, more studies have been published in the literature evaluating the opening proximal wedge osteotomy with low-profile plate system (LPS) fixation.[6],[7],[8],[9],[10],[11] Notably, a randomized controlled trial by Glazebrook et al. reported comparable radiographic and clinical results between the opening wedge with LPS fixation and proximal Chevron technique, with a subjective preference of surgeons to the opening wedge technique with LPS fixation citing its ease. The addition of the LPS provides stable fixation, which allows earlier return to weight-bearing status with functional rehabilitation, in contrast to standard proximal procedures, which require 6—8 weeks of strict nonweight-bearing recovery status.[11] A few cases have been reported with nonunion, malunion, symptomatic hardware, or hardware failure using LPS fixation.

This study aims to present the results of open proximal wedge osteotomy with LPS fixation for adult hallux valgus in terms of degree of correction both subjectively and radiologically, the rate of nonunion, malunion, infection, hardware failure, patient satisfaction, patient function, and reduction of pain.

After acquiring appropriate institutional review board approval, 12 consecutive patients (14 feet) were included in this retrospective case series. All underwent proximal wedge osteotomy with Arthrex Opening Wedge Low-Profile Plate and Screw System (LPS®) (Arthrex Inc., Germany) fixation. Surgery was performed by a single orthopedic surgeon from January 2014 to December 2015. All patients were assessed by an orthopedic board-certified physician, where detailed history and physical examinations were performed including demographic data, comorbidities (by history and from patient files), and medications. Data were collected using medical charts of the patients. Satisfaction rates were assessed subjectively using a home-made questionnaire. One musculoskeletal radiologist was involved in determining the correction objectively through radiological images. Patients with radiographic evidence of an abnormal hallux valgus angle (HVA) accompanied by a shape dissatisfaction and/or pain were included in the study. Exclusion criteria included patients who underwent any other correction of hallux valgus not using an LPS fixation, first metatarsophalangeal (MTP) joint arthritis, and hypermobility of tarsometatarsal joint or any other concomitant foot deformities.

Patient consent was obtained postsurgery to complete a questionnaire, which included demographic data, main complaint upon admission, pain scale (1—10 analog pain scale) before and after surgery, onset of pain related to walking (patients were measured in terms of time against their own preoperative reported result) or footwear, chronic pain, management, nonsurgical treatments pursued, conservative management, and perceived cosmetic appearance before and after surgery. The answers included yes, no, and other options as well as open-ended responses. Patients filled the questionnaires at their 6-week follow-up appointment (for bilateral patients, each foot was scored separately on the questionnaire) and again at their last follow-up visit. Follow-up was up to 3 years. Radiographic images were also taken at 6 weeks, 12 weeks, and finally, at the last follow-up. All analyses were conducted using Statistical Analysis System SAS® (SAS Institute Inc., released 2007, SAS for Windows, version 9.2, Cary, NC). A Student's t-test with a 95% confidence interval was used to compare pre- and postoperative angles, and P < 0.05 was considered significant in numerical variables (age, HVA-pre, HVA-post, intermetatarsal angle (IMA)-pre, and IMA-post) that were summarized and reported as means and standard deviations. Categorical variables (implant failure, healing problem, preoperative complaints, preoperative pain status, and postsurgical satisfaction) were summarized and reported in terms of frequency distribution.

The operative technique consisted of an incision over the dorsal first web space, and the adductor tenotomy is performed as well as releasing part of the intermetatarsal ligament. A correction was achieved. Dorsomedial incision over the first MTP joint is made and digital nerves are identified and protected throughout the operation. After raising the flaps of the capsule, bunionectomy is done with taking a thin piece of bone from the metatarsal. Then, under the guidance of C-arm imaging, utilizing a dorsomedial approach, the tarsometatarsal joint is identified with a needle, and then, proximal metatarsal osteotomy is done 15 mm distal to the first tarsometatarsal joint. A gradual opening of the wedge is used until the desired angle is reached, which gave excellent correction of the IMA as well as a right place for the lateral sesamoid bone. Depending on the amount of correction, the size of the wedge is decided. Fixation is done with screws and a medially placed plate. Augmentation with an auto bone graft impacted into the wedge side is done. Finally, excellent correction of the IMA and HVA with a congruent MTP joint was achieved [Figure - 1]. Patients were allowed full weight-bearing immediately after surgery. 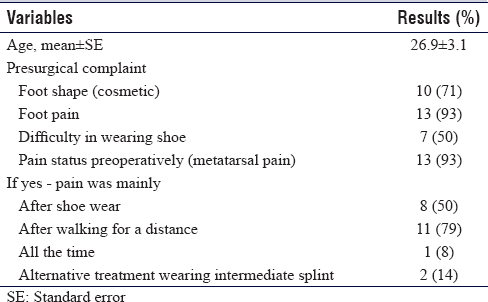 [Table - 3] shows the clinical preoperative data for the 14 feet. At 6 weeks postoperatively, 4 feet had healing bone, and after 12 weeks, 7 more feet had healed bones. Two patients were lost to follow-up at 12 weeks (done at the end of 2015), and two more were lost to follow-up at the 3-year mark, resulting in an average follow-up of 26.4 months. All remaining patients had complete healing on radiographic images after 3 years with no changes noted in the angles measured. There was no implant failure noted in this study.

This case series study demonstrated the clinical and radiological subjective and objective outcomes of 12 patients (14 feet) with hallux valgus, who underwent open proximal wedge osteotomy using an LPS fixation in a single center. Review of the literature showed that there was no ideal surgical technique described to treat hallux valgus; there were 150 different surgical techniques described in the literature.[4] Due to the technical limitations and its potential complications, the use of opening wedge osteotomy has been limited and reduced in the past.[5] However, the addition of LPS fixation has spiked the interest in the technique in recent literature.[6],[8],[9],[10]

The postoperative overall satisfaction in this study population is considered good; ten out of 12 patients were satisfied postoperatively at 6 weeks. At 3 years, four patients were lost to follow-up leaving eight total patients (10 feet). One of the unsatisfied patients reported complete satisfaction at 2 years, and the other was lost to follow-up. The technique has even better satisfaction results when plotted on larger sample sizes; Shurnas et al., who evaluated 78 patients (84 feet), showed that 70 patients (90%) noted good-to-excellent subjective satisfaction after the surgery.[9] There were no implant failures in this study population with all followed patients showing complete healing at the last follow-up, a recurring theme when plotted for larger sample size by Shurnas et al., is shown, which reported one case in their population that had nonunion, who underwent a Lapidus procedure in the revision surgery, adding to that there was no failure to the hardware used.[9] Furthermore, a study by Han et al. showed zero cases of nonunion when they compared oblique and straight osteotomies in the opening wedge technique.[14] Similarly, a study performed by Smith et al. reviewed 47 patients who underwent opening wedge osteotomy and reported 6 patients with hardware irritation, and 4 patients had nonunion or delayed union.[10] While in this study, the union rate seems high. The authors attribute that to the low number of patients included in the study.

The small number of patients involved in the study and the retrospective nature of the study, which led to the lack of preoperative functional outcome measures.

This study shows a single surgeon experience with open proximal wedge osteotomy using a low-profile plate fixation resulting in high overall satisfaction and is proving to be an attractive option for patients seeking hallux valgus deformity correction. Moreover, significant improvement in the clinical and radiological parameters of patients who underwent surgery was noted in this study.

AAA conceived the study and conducted research, SSA designed, collected data, involved in writing and proof reading the manuscript, MJA aided in determining angles on all x-rays and interpreted raw data, AFA and FHA were involved in data collection and analysis, HMA provided valuable support in data collection and management and logistic support, and finally AAA was involved in data analysis, manuscript writing, editing, and proof reading. All authors have critically reviewed and approved the final draft and are responsible for the content and similarity index of the manuscript.