The intertrochanteric fracture is one of the most common fractures around the hip in older patients.[1],[2] It constitutes up to 48% of all hip fractures and expected to increase due to the aging of population.[3] Usually, it results from low-energy trauma in most patients.[1]

The management of unstable intertrochanteric fractures in older patients is a challenge. Mainly due to the difficulty in obtaining anatomical reduction and the commonly associated comorbidities that lead to higher rates of morbidity and mortality.[4]

The treatment of choice of unstable intertrochanteric fractures in older patients for several decades has been internal fixation. Many studies have shown mechanical and technical failures of this type of treatment.[5],[6],[7]

Treatment with primary cemented bipolar hemiarthroplasty could speed up the return of activity of these cases to their preinjury level and reducing the postoperative morbidity caused by immobilization or fixation failure.[8]

This study aims to evaluate the clinical and functional outcomes of primary cemented-hemiarthroplasty in older patients with unstable intertrochanteric fracture.

We prospectively followed 60 patients from January 2014 to February 2016 who were treated with primary cemented bipolar hemiarthroplasty - which has an additional artificial joint between the two components of the prosthesis - for unstable intertrochanteric fracture. We used total coverage sample during the study.

They were treated by the same orthopedic surgeon in the same hospital as soon as the condition of the patient was stabilized, usually within 72 h (average 34 ± 2.9 h) after their admission. Structured data sheet used to report demographic data. Fracture type was classified according to Kyle classification.[9] All patients received 1.5 g of cefuroxime at the time of induction of anesthesia and continued twice a day intravenously for 48-h postoperatively as prophylaxis. In addition, they received 4000 IU of low molecular weight heparin for 4 weeks' postoperatively. We reported the perioperative parameters including duration of surgery, weight-bearing status, duration of admission, time to full weight bearing, and clinical complications. The postoperative interval of follow-up was at 2, 6, and 12 weeks and at the final follow-up (mean 13.66 ± 5.9 months). The functional outcome was assessed by Harris Hip Score (HHS) at 3 months and at the final follow-up.

In the lateral decubitus position, surgery was done through a Hardinge approach. The comminuted proximal femoral fragments were removed. The greater trochanter with abductor attachment was preserved and reattached with cerclage wire through drilling holes to the bone after canal preparation, without complications, and with good union during the follow-up period. Bone cement applied using finger packing, then bipolar prosthesis was applied. The implant used was the Link SP II hip prosthesis produced by Waldemar Link-Hamburg [Figure - 1] and [Figure - 2]. 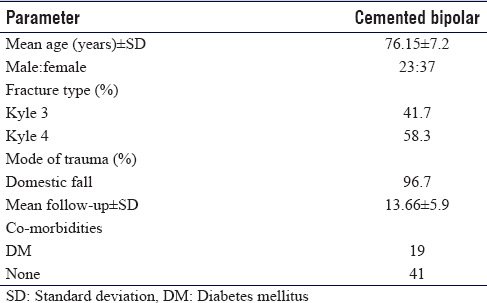 Fifty-six patients (93.3%) were operated in <2 h with a mean operative time of 109 ± 7.2 min. Mobilization in bed was done for all patients on the same day of operation; 93.3% started partial weight bearing on the 1st postoperative day; and at the end of the 1st week, 85.2% started full weight bearing.

At the final follow-up, 10 (16.7%) of the 60 patients had died and 2 (3.3%) were lost to follow-up. Two patients died due to pulmonary embolism, one after 6 weeks and the other one after 12 weeks' postoperatively; one patient died due to sepsis after 6 weeks' postoperatively. For the rest, the cause of death was unknown and occurred after 12 months' postoperatively. Considering complications; 3 (5%) patients had infections; two had a deep infection (deep to superficial fascia) necessitated removal of implants, one managed with resection arthroplasty, the other one was revised later with 2nd stage after exclusion of infection. The third one had superficial infection managed with debridement and intravenous antibiotics. The isolated organism in all was Staphylococcus aureus. Two (3.3%) patients were complicated with deep venous thrombosis (DVT) and 5 (8.3%) patients had bedsores, but three of them had bedsores before the operation. We had only one (1.7%) patient with hip dislocation due to dashboard injury, which was reduced surgically. The mean HHS at the time of final follow-up was 91.14 ± 5.7. Majority of the patients (96.7%) had a pain-free mobile hip with an adequate amount of flexion, abduction, and rotation. The reoperation rate was 5% (three cases) [Table - 2].

Table 2: Clinical and mechanical complications in the study group

Our 1-year mortality rate was 16.7%, which is slightly more than Elmorsy et al.[24] and Grimsrud et al.[25] who reported (12.19%) and (10.3%), respectively. We had a 5% infection rate whereas Stern[26] reported 6.8% and Stern and Angerman[16] reported 2.8%. Two (3.3%) patients had DVT and 5 (8.3%) cases had bed sores, two of them had bedsores preoperatively. Grimsrud et al.[25] reported one case of DVT and two cases of bed sores postoperatively; all were nonambulant postoperatively; this shows the importance of mobility after surgery, which is one of the main aims of this treatment. Elmorsy et al.[24] reported no DVT or bedsores.

Primary cemented bipolar hip hemiarthroplasty may offer a good option in the treatment of unstable intertrochanteric fractures in older patients. The early mobilization and decreased complications are the most important advantages of this approach. A comparative study with internal fixation group, a larger number of patients and longer duration of follow-up is recommended.

The authors certify that they have obtained all appropriate patient consent forms. In the form, the patients have given their consent for their images and other clinical information to be reported in the journal. The patient understands that name and initials will not be published and due efforts will be made to conceal identity, but anonymity cannot be guaranteed.

ASE conceived and designed the study, conducted research, provided and organized data. AHA and ASE collected, analyzed, and interpreted data. ASE, AHA, and YNG review the literature. ASE and YNG wrote initial and final draft of the article. EME did all surgeries, provided research material and logistic support. All authors have critically reviewed and approved the final draft and are responsible for the content and similarity index of the manuscript.