Objectives: Armed forces represent a physically active population who engage in regular exercises, recreational sports, and physical training that place them at high risk of injury to an anterior cruciate ligament (ACL). Considering the high occupational demand, uniformed military personnel (UMP) are encouraged to have a surgical reconstruction of a ruptured ACL to resume their military activities. The aim of this study was to assess the outcomes of a full return to duties in the armed forces after primary ACL reconstruction. Methods: A single-institution, retrospective review through the analysis of surgical record data and phone interviews of UMP who underwent primary ACL reconstruction during a 5-year period was conducted. Measured endpoints were the rate of return to full military duties as well as knee function (measured by the Lysholm score). Results: The total number of UMP who underwent ACL reconstruction included in the study was 137 with a minimum follow-up of 1 year. All patients were males. The mean age was 30.2 (minimum 22, maximum 44) years. Isolated ACL injury was found in 30.7%, whereas 69.3% were associated with a meniscus injury. The majority of the surgeries were done within 5 years of the injury (92%). The mean postoperative Lysholm functional score was 90.22. Seventy-five percent of the service members returned to full military activity. Conclusions: The overall majority of UMP returned to full military duties with excellent functional Lysholm score that shows the effectiveness of ACL reconstruction in this active population.
Keywords: Anterior cruciate ligament, ACL injuries, knee, military, sports

Anterior cruciate ligament (ACL) injury is one of the most common injuries in sports, especially those which involve pivoting and jumping movements.[1],[2],[3] ACL tears comprise a high percentage of the knee injuries in the uniformed military personnel (UMP) community due to the unique physical demands of the job. Although the true incidence of ACL injuries among UMP is unknown, a population study among all service members in U.S special operation forces between 1997 and 2003 calculated ACL injury rates to be ranging from 2.29–3.79 cases per 1000 person-years.[4]

Physical demand for professions such as the military makes it difficult to modify duties. UMPs are required to perform heavy duties such as distance running and aggressive impact on a daily basis to be able to continue in the profession. Therefore, UMPs accept surgical reconstruction as the most common treatment option. However, the existing literature shows that surgical treatment does not work in up to 50% of cases.[5],[6],[7],[8] Antosh et al. reported on 450 ACL reconstructions among UMPs and only 43% had a full return to military service.[9] Cullison et al. reported dismissal of 23% of 120 UMPs from service after ACL reconstruction surgery.[10] This is because the ability of this population to return back to their preinjury level of activity after ACL reconstruction is governed by different factors, which include the knee function after the operation, social reasons, and fear of reinjury. The military tough work environment is an added factor that might decrease the rate of return to the preinjury level of activity.[6] Rai et al. looked into the outcome of 300 ACL surgeries in UMP where 5% developed postoperative complications such as infection, graft failure anterior knee pain, and stiffness.[11]

Reliability and validity of the Lysholm score were well established in the literature.[12] As patient-administered scores, the Lysholm knee score demonstrated acceptable psychometric parameters. It also has acceptable responsiveness to be used in early return to function after ACL treatment. In this article, we report the outcomes of a full return to duties in the UMP after primary ACL reconstruction. We also analyzed the risk factors, which could lead to long-term disability.

This cross-sectional retrospective study was conducted in the main referral Armed Forces Hospital in Oman/Muscat. Data were retrieved from the electronic health system for 5 years (2011–2015). The target population was identified by the medical record number. With minimum of one-year follow-up, all active UMP who underwent ACL reconstruction surgery were matriculated in the study. Nonactive personals with multi-ligament injury or revision surgeries were excluded.

Documented data included age, rank, injury type, time until surgical intervention, and radiological and surgical arthroscopic information. The radiological and arthroscopic information confirmed whether the ACL injury was isolated or associated with meniscus injury as well as confirming osteoarthritis (OA) changes if any. The second stage was conducting phone interviews by an orthopedic resident to obtain information about their current work status and to perform Lysholm functional knee scores. The response rate to phone interviews was 100%.

The ACL reconstructions were performed or supervised by the same orthopedic surgeon at a tertiary military hospital. All surgeries were done arthroscopically following the same technique. Quadruple hamstring autograft was used, fixed with tight rope in the femoral side and interference screw in the tibial side. All patients followed the same structured rehabilitation program postoperatively.

The primary endpoint was the rate of return to military missions. Return to full duties is defined as the return to previous professional activities without physical limitations as reported by the Medical Council and the Military Battalion. Although our military forces are not engaged in war or active combat, it is planned to have regular physical training to stay in shape. These activities include Combat fitness training (CFT), Physical fitness training (PFT), heavy driving, and sports. Failure to return to duties was defined as the inability to continue military service; patients were discharged from the army or transferred to a job where they were no longer required to perform military physical training. The third group of patients returned to their duties with restrictions. These patients have returned to their jobs but are still unable to carry out heavy physical activities.

Categorical data were concise using percentages and Chi-squared tests or Fisher's exact test, whichever was most appropriate. Continuous variables such as means and standard deviations or medians and interquartile ranges were examined using the Student's t-test and analysis of variance or Mann–Whitney U-test as appropriate. Significance was recognized when P > 0.05. All data were entered into SPSS program for Windows version 22 (SPSS, Chicago, IL, USA) which was used for subsequent statistical analysis.

The total number of UMP who underwent ACL reconstruction was 137, all of whom were included in the study [Table - 1]. All patients were males, with a mean age of 30.2 years (minimum 22 maximum 44). Majority of the sampled population were none officers (93.4%, 128), whereas only 6.6% (9) were officers. More than two-thirds (69.3%, 95 UMP) had an associated meniscus injury and 30.7% (42 UMP) had an isolated ACL injury. One hundred and two patients (74.5%) returned to full military activity, (they were able to perform fitness combat training [CFT], fitness training [PFT], heavy driving, and sports) and 32 patients (23.4%) returned to duties with physical restrictions as they were not able to re-join CFT, PFT, or sports. Three patients (2.2%) did not return to their duties and left military services. 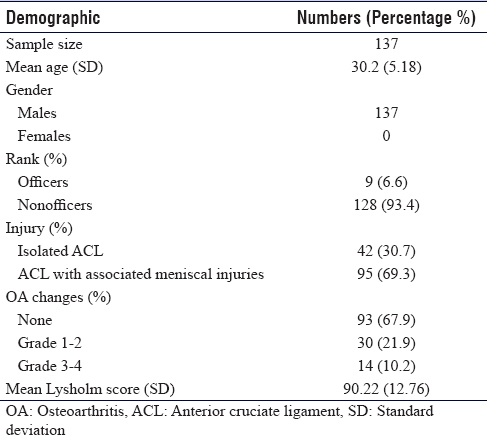 Subgroup analysis was done to assess if associated OA changes, meniscal injury, or delayed surgery affected the functional scores or return to duties. None of these variables showed a statistically significant difference.

Table 2: Compare the outcome of the Lysholm Score to the return to work conditions

Our results show a lower rate of return to full duties compared to the literature; however; military training and the level of physical activities are expected to be variable. The ability to return to the previous level of activity after ACL reconstruction surgery is variable, as reported by the previous literature [Table - 3]. However, this outcome measure is influenced largely by the type of activity involved. A research study among U.S military aviators showed that 94.3% returned to aviation service and 2.3% were terminated.[13]

Table 3: Percentage of return to military service from different published reports compared to our series

UMPs are thought to resemble high-level athletes who have similar expectations of returning to preinjury status.[14] The athlete's state of mind plays an important role in his return to sport after the successful rehabilitation of ACL reconstruction surgery. Previous literature has shown that fear of reinjury was a critical factor in not returning to the level of preinjury activity.[14] This can explain why 46.8% (11 excellent and 4 good of 32 patients) of our patients who have returned to work had good and excellent functional grades, compared to the patients who did not return to their duties.

The literature showed that ACL injury may be associated with meniscal injuries in 42%–77% of the cases and cartilage injury in 20%–23% of the cases. These associate injuries were associated with a lower return rate to play.[15] Furthermore, patients with cartilage lesions showed worse outcome in functional score compared to patients without cartilage lesions 2 years after ACL reconstruction.[16] In this series, most patients underwent delayed ACL surgery approximately 1-year delay after injury, which may have led to higher rates of associated injuries. However, we could not correlate the presence of associated injuries to lower return to military tasks.

The result of our study was to measure the ability to return to the previous level of duty. Although this is not easy task, reports have shown that athletes were able to return to their previous of activity, although they couldn't perform their best.[3] Similarly, in this series, although 75% of the patients return to preinjury activities, the remaining questions are they facing difficulty in performing the required duties? The Lysholm functional score of the knee was used to study the effectiveness of their postoperative performance where the majority showed an excellent score; however, the average score among different groups was not statically significant. This finding should future work to determine the quality of postoperative military work performance.

Although high-rank officers are expected to undergo relatively less physical activity jobs compared to nonofficers,[10] our study did not show a statistically significant difference in returning to activities between different ranks after ACL reconstruction. However, it is worth mentioning that only 9 patients (6.57%) were officers.

The study has a few limitations that could not be overcome. Although reliability and validity of the Lysholm score were well established in the literature, the patient-administered Lysholm knee score demonstrated acceptable psychometric parameters. It also has acceptable responsiveness to be used in early return to function after the ACL treatment. In this study, the obtained functional score corresponded with the return to activity. However, the reliability and responsiveness of physician-administered Lysholm functional knee scores are lower compared to self-administered Lysholm functional knee scores. Moreover, it was difficult to obtain the exact time to return to full duties due to the lack of information from the e-health system, and it was difficult to obtain accurate numbers from patients. Another limitation is the fact that this study is a retrospective analysis; it would be more reliable to conduct a similar study prospectively.

The vast majority of UMP who have returned to full military assignments with an excellent functional Lysholm degree demonstrate the effectiveness of the surgical intervention in this active population. This report may instruct sports surgeons working in a military setting to advise patients with ACL deficiencies and who are considering surgical reconstruction on a possible return to work. It also may guide the employers on the expectations and prognosis of their injured personnel.

The study was approved by the Ethical Committee at the Armed Forces Hospital.