Rice bodies: An uncommon incidental finding inside a bursa over a hip implant

Osteosynthesis in orthopedic surgery involves placement of various implants inside the body as a means of fracture fixation. Certain implants have the propensity to become loose due to physiological cyclic loading or other biomechanical issues. A prominent implant often develops surrounding bursitis with or without an external wound. Removal of a prominent implant is done for clinical improvement with or without revision surgeries. A rare incidental finding of multiple rice bodies inside a bursa over an implant prominence is a rare event and has been described here with relevant details. The preoperative clinicoradiological features did not show any feature suggesting their presence, and no associated infective pathology including bacterial, mycobacterial, or fungal was identified in further investigations. A handful of cases associated with implant-related issues have been reported so far, and this case adds value to the existing literature with its rarity and learning potential.
Keywords: Bursa; complication; hip; implant; rice body

Initially identified in a tubercular infection, rice bodies are found in various inflammatory processes such as arthritis (rheumatoid, juvenile, seronegative, and septic arthritis), traumatic injuries, chronic bursitis, and within tendon sheaths.[1],[2] There is no definite etiology known and fragmented or degenerated synovium is supposed to give rise to them as they get encased in fibrin according to one theory while another theory suggests activated fibroblasts releasing collagen that is surrounded by fibrin sheath as precursor to their formation.[1],[2],[3] Prominent implants have been associated with irritation to the overlying bursa that may often be symptomatic as per its size, site, and magnitude of implant impingement more so over bony prominences with scant soft tissue cover. Removal of an implant with or without revision surgery is done in most instances to relieve pain and morbidity. Usually, bursa overlying a prominent implant is thickened with serous effusion that is drained, and the bursal sheath is either retained or excised as per surgeon's discretion. Unusual occurrence of rice bodies within the bursa around a protruding implant, however, is a rare event. The literature is sparse about the presence of rice bodies as a complication of a certain implant and less so if that is an incidental finding.

A 42-year-old male was managed for his fracture neck femur on the right side by osteosynthesis with multiple (three in number) titanium-cannulated cancellous screw fixation as per standard technique considering his younger age and acute presentation. The operation was uneventful with no complicated perioperative period. The fracture, however, showed signs of nonunion in the follow-up radiographs, and after 6 months, screws seemed to loosen and become prominent with a visible bump over trochanteric region due to the subsequent collapse of the fracture site. The tip of one screw in the radiograph was penetrating into the hip joint [Figure - 1]a. He was advised removal of screws and hemi-replacement arthroplasty with endoprosthesis. The patient refused the further procedure due to financial issues and he started to bear weight despite the explained risk of screw breakage. He, however, has no history of pain till now and is performing activities of daily living albeit with a limp. There were no signs of localized or generalized inflammation, fever, or related abnormality in hematological and serological studies. At 9 months, the screws were removed on patient request with a mini-incision over the swelling. During the removal of the last screw, multiple, white, small masses with polished surfaces in the form of diskettes were noted coming out of the wound with some of these present adjacent to the screw site and some coming out of the cannulated portion of the screw [Figure - 1]b. These were collected for later observation as surgery was finished. The masses were round to oval with shiny white surface and apparently firm-to-hard in consistency [Figure - 2]. Their appearance and features were consistent with “rice bodies” similar to those found in varied musculoskeletal conditions. No purulent collection was noted through the surgical wound, and a thorough lavage was done before closure over a suction drain. The culture and biopsy of the surrounding tissues, rice bodies, and implant showed negative Gram's and acid-fast bacilli screening and no growth for bacteria, mycobacterium, and fungal-causative organisms. Further submission of samples for polymerase chain reaction-based study (BACTEC) was also negative for mycobacterial infection. Histopathological study of the surrounding soft tissues showed neutrophil- and lymphocyte-rich background suggestive of localized inflammation. The white bodies were seen as structured mass of firm-to-dense fibrinous material surrounded by collagenous material consistent with rice bodies.

Urruela et al.[4] described the first case of rice bodies as a complication following orthopedic implantation in shoulder region bursitis that was later managed surgically. Since then, we tried to search related cases and very few of those could be found [Table - 1].[5],[6],[7],[8] Radiographs sometimes show their presence, but magnetic resonance imaging is best to identify these in suspected cases; however, we had no clinicoradiological rationale to warrant it. The radiographs were not showing any gross feature suggesting further investigations. No relevant clinical features suggestive of any rheumatoid, seronegative, or septic arthritis were present in our patient. It just appeared as a loosened implant possibly due to noncompliance to weightbearing protocol. The continued physiological loading in uniting fracture might have produced extraordinary forces to make the implant loose that subsequently cut through the superior bone limit. Localized inflammation coupled with cartilaginous damage may have produced multiple rice bodies in the capsule and adjoining area. Synovial irritation by hardware or intraoperative trauma to synovium or osteo-cartilagenous tissues by penetrating injury to hip joint might be a reason for their formation. Synovial shedding following synovial micro-infarcts has been suggested as an etiology by some authors.[9] Another important etiology in the light of this fact may be local synovial trauma by hardware prominence that on cyclic loading cumulates micro-damages with subsequent bits of synovium encased in fibrin leading to rice body formation. There have been reports of chronic bursitis with rice bodies without underlying pathology.[10] This might be another reason in our case as the associated trochanter bursitis in our case, following irritation by prominent hardware, may be one of the similar occurrences. Our case highlights the knowledge of this complication and the need for further studies for better understanding of this queer disorder. 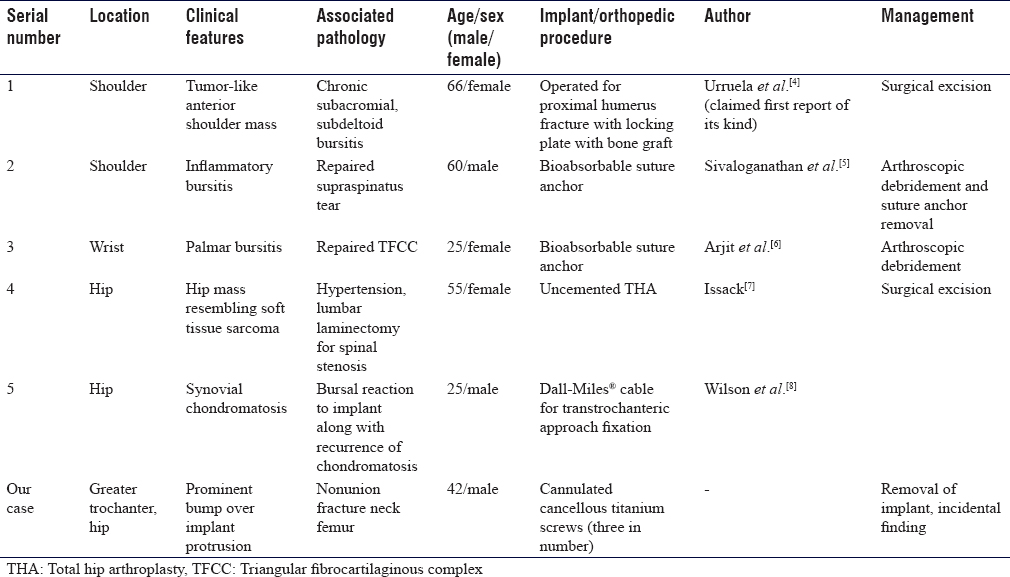 The prominence of hardware is not an uncommon problem in orthopedic care, but prolonged irritation of adjacent structures may result in chronic inflammation that rarely may accompany rice bodies within bursa. Rice bodies may also be found in asymptomatic individuals without related underlying pathology and may be an incidental finding during surgery. Anticipation of this rare complication and further workup to localize any sinister underlying this disorder is the mainstay of the management. Further research in the pathogenesis of rice bodies is required to understand these enigmatic lesions.

GSD collected and organized data and wrote initial draft while BS and TP wrote final draft of the article and provided critical input. All authors have critically reviewed and approved the final draft and are responsible for the content and similarity index of the manuscript.