The rapid economic growth that Saudi Arabia experienced in the last 40 years led to a remarkable increase in motorization and road network construction. Motor vehicles are considered as the primary method of transportation in Saudi Arabia. Consequently, motor vehicle accidents (MVAs) and accident-related injuries and deaths have become a major health hazard in the country. For instance, in 1999 and later in 2010, studies have indicated that MVAs are responsible for killing one person and injuring four persons every hour.[1],[2] In addition, the 2005 traffic data registry in Saudi Arabia showed that the number of MVAs was almost 290,000 with more than 5000 deaths and 34,000 injuries; half of these deaths and injuries occurred in young individuals below the age of 30 years.[3]

Wearing seat belts has been proven to be very effective in reducing the number of MVA-related injuries and deaths.[4] The use of seat belts while driving was made mandatory by the law in Saudi Arabia as of December 5, 2000.[5],[6] In the first few months after the enactment of this law, the percentages of seat belt usage among drivers and passengers in Riyadh were 60% and 22.7%, respectively, compared to a small percentage of 2.9% seat belt use by drivers before the law enactment.[5] These percentages decreased to 27.8% and 14.7%, respectively, after the first few years of enforcing the law, in other words, after the “honeymoon” period. However, the positive impact of enacting the law was still significant.[6] This positive impact was evident through the drop in the number of monthly adjusted MVA-related injuries after the enactment of the law.[5]

Distracted driving behaviors (DDBs) such as talking on the cell phone, texting massage, eating, drinking, adjusting the car's radio, and interacting with passengers in the car while driving may create a potential traffic safety concern.[7],[8] Despite the potential harm associated with DDBs, as far as we know, there were no studies conducted to determine the prevalence and consequences of these behaviors in Saudi Arabia.

Health-care providers (HCPs) such as physicians, nurses, and emergency medical service providers are exposed to the consequences of MVAs often in their career. They play a major role in the management and prevention of MVAs by providing acute care, long-term care, and communicating a credible traffic safety message to the community. Therefore, we assume that Saudi HCPs should be more committed to seat belt wearing and abstaining from DDBs while driving compared to Saudi non-HCPs. However, it is unclear about the percentage of HCPs who follow the law pertinent to wearing seat belt and abstaining from DDBs while driving. To our knowledge, there were no published studies discussing the attitude of Saudi HCPs toward seat belt usage and practice of DDBs. The objective of this study was to determine the prevalence of seat belt usage and DDBs among Saudi HCPs in Saudi Arabia and to explore factors associated with seat belt under-utilization among HCPs compared to none-HCPs.

This study was carried out in Saudi Arabia from January 1, 2015, to June 30, 2015, after the approval of King Abdullah's International Medical Research Centre Ethics Committee. In this study, consent was deemed unnecessary by the Ethics Committee considering that identifying information were not collected from the participants.

Using snowball sampling approach, a cross-sectional online questionnaire (that the team developed) in both English and Arabic was distributed among various Saudi HCPs and non-HCPs in Saudi Arabia through E-mails and social media outlets (e.g., Twitter, Facebook, and WhatsApp). The sample was collected through sending the links to the questionnaire to group administrators who send it to their group members in social media such as WhatsApp. In addition, through targeting individuals with a large number of the followers on Twitter, the questionnaire was sent to more individuals. This method of snowball sampling is a nonrandom and prone to sample selection bias, but known to be cost-efficient and fast.

The questionnaire included demographics (age, gender, marital status, and current job), questions about compliance to seat belt usage, and questions about DDBs (i.e., texting massage, talking on the cell phone, drinking, eating). The process of translation started with a translation of the questionnaire from English to Arabic by two investigators independently followed by sending both translations to a certified translator who created a modified version then was discussed among the authors to come up with a final version that was disseminated to individuals. Linguistic validation to ensure the equivalence of the questions in terms of conception and thoughts was carried out throughout the process of translation and by consensus in the final version. In addition, cultural validity to ensure the appropriateness of the concepts to Saudi culture was also done during team meetings to discuss final translation version. 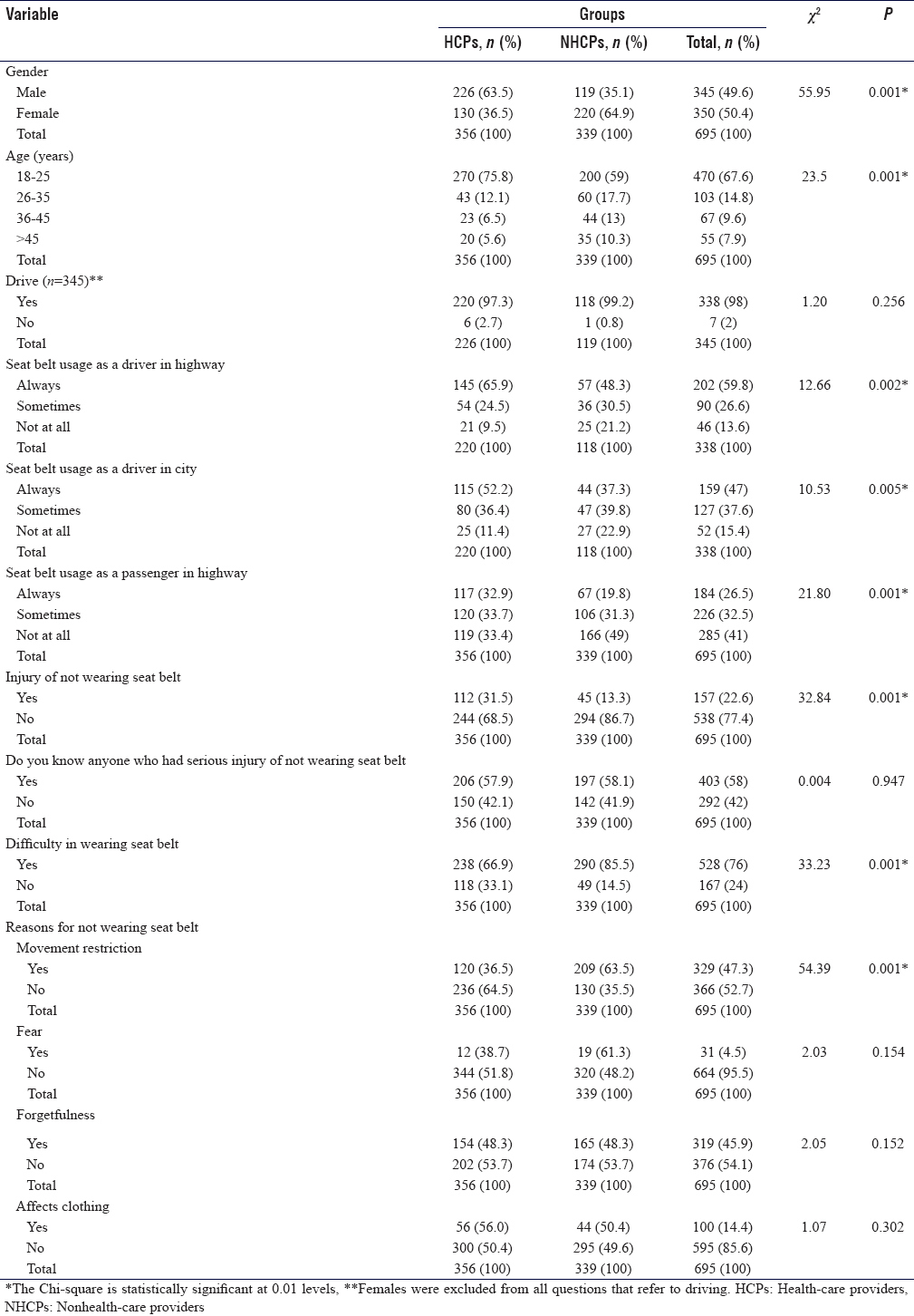 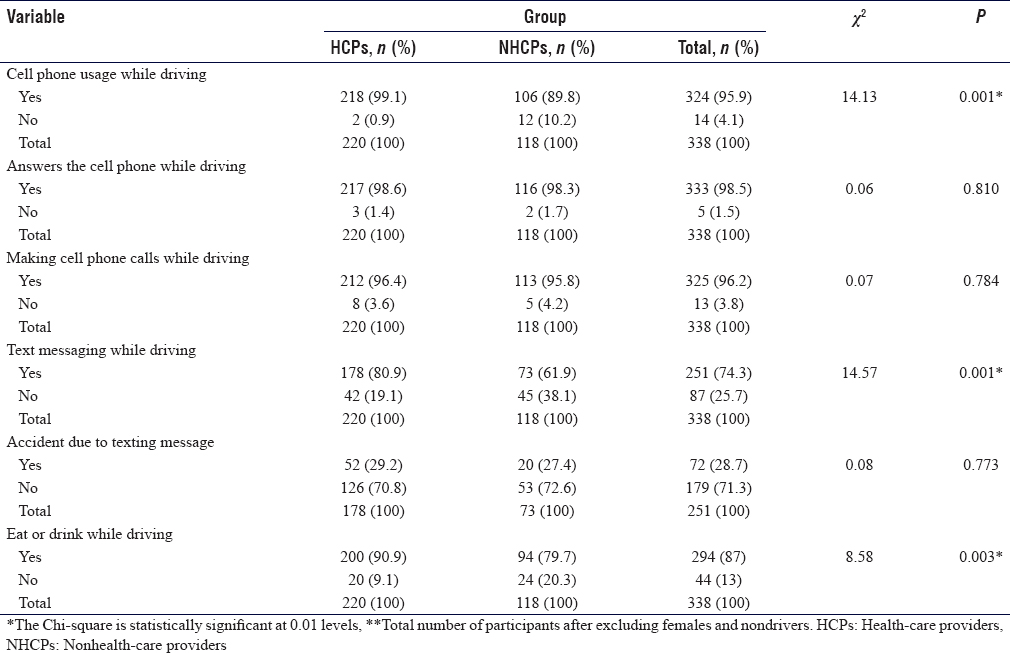 MVAs are a major cause of morbidity and mortality in Saudi Arabia; almost one-third of Ministry of Health hospital beds are occupied by MVAs at any time.[9] One of the most important causes of this serious health endemic is noncompliance to seat belt use.[9] It was found that wearing seat belt is the sole passive preventive measure to reduce the risk of injury or death from MVAs.[10] This hazardous practice is abundant among the population of Saudi Arabia despite the implementation of strict laws on seat belt usage. We chose to focus on the behavior toward seat belt usage among the population of HCPs, and we found that they are more compliant to seat belt usage compared to non-HCPs. We believe that this higher rate of compliance among HCPs can be explained by the fact that they are more exposed to trauma victims and deaths due to MVAs than the rest of the non-HCPs population. The findings of this study can be compared to the findings of a similar study that discussed the prevalence of seat belt usage, conducted on HCPs in Turkey by Dede [10] which also reported high rates of compliance to seat belt usage in HCPs. This study also reported that there was no statistically significant difference between age groups in terms of compliance to seat belt usage. In our study, we found that compliance to seat belt usage was higher in the age group between 18 and 25 years. This finding is contrary to other studies discussing MVA prevalence in the Saudi population, where MVAs are more prevalent in younger individuals.[1],[2],[5] Other important hazardous practices that have not been studied before in Saudi Arabia are DDBs, such as talking on the cell phone while driving. Receiving phone calls while driving has been proven to have a negative effect on the quality of driving.[11] Some safety driving measures that could be affected are speed control and lane keeping.[11] Using cell phone while driving has also been proven to increase the risk of being involved in MVA by 4–6 times in the population of Oman which has a similar driving environment as Saudi Arabia.[12] We found that these practices are remarkably prevalent among both HCPs and non-HCPs, with no statistically significant difference (P > 0.005). In Qatar where the driving environment is very similar to Saudi Arabia, a study revealed that the incidence of MVAs was significantly higher among cell phone users.[8] Upon comparing our findings with the finding of an international survey on DDBs practice in the USA by Schroeder et al., we found that 98.6% of HCPs and 98.3% of non-HCPs answer their cell phones while driving and only 14% of total drivers in the USA answer their cell phones while driving.[7] Schroeder et al. also demonstrated that only 14.3% of the total USA drivers send text messages and E-mails while driving, while our study demonstrated that 80.9% of HCPs and 61.9% of non-HCPs texting message while driving.[7] We believe that this remarkable difference is due to the implementation of strict laws against cell phone use and text messaging while driving in the USA, the loosely implemented laws in Saudi Arabia. The practice of DDBs is remarkably prevalent in the population of Saudi Arabia, especially cell phone use, regardless of the implementation of a law that bans cell phone use while driving in recent years. This raises questions about law enforcement measures local to Saudi Arabia. We believe that this is both a legislative and a cultural problem. It needs to be addressed by enforcing the implementation of cell phone laws and by changing the people's mentality toward DDBs and shedding more light on their serious and, sometimes, deadly consequences.

The HCPs are more compliance to seat belt compared to non-HCPs, while the practice of DDB among both groups is similar. We believe the need of more studies to dissect the reasons behind the higher rates of DDBs in Saudi Arabia. Furthermore, nationwide awareness campaigns are highly recommended to increase public awareness of the importance of using seat belt and avoiding DDBs in Saudi Arabia.

AHJ conceived and designed the study. LIA and TSA conducted research, provided research materials, and collected and organized data. WP and MHA analyzed and interpreted data. MAM and NAA wrote initial and final draft of the article and provided logistic support. All authors have critically reviewed and approved the final draft and are responsible for the content and similarity index of the manuscript.