Objectives: Legg–Calvé–Perthes Disease (LCPD) is a juvenile hip disorder in which interruption to the blood supply of the femoral head causes osteonecrosis. Previous studies reported an association between attention deficit hyperactivity disorder (ADHD) and LCPD. This study aimed to assess the relationship between ADHD and LCPD disease in a tertiary hospital in Riyadh city, Saudi Arabia. Methods: This is a case–control study that included 50 case subjects (LCPD group) and 100 controls. Both groups underwent clinical assessment by the 5th edition of the Diagnostic and Statistical Manual of Mental Disorders criteria to diagnose ADHD and to compare the proportions in both groups. Results: The age range of the study population was 4–19 years. In the case group, we collected the data from 11 females and 39 males. The age ranged from 4 to 19 years (mean 9 years). While in the control group, we collected the data from 47 females and 53 males. The age range was 4–15 years (mean 8 years). In both groups, 34 children (22.7%) were diagnosed with ADHD, 15 (30%) in the case group and 19 (19%) in the control group. There was no significant difference in ADHD incidence between the case group and the control group (P = 0.1293, odds ratio = 1.827). LCPD has a significant male predominance (78%). Conclusions: We found that the prevalence of ADHD in LCPD is high (30%), which is comparable to the reported literature but as ADHD was higher than the reported literature in the control group (19%) the difference was statistically insignificant.
Keywords: Attention deficit hyperactivity disorder, diagnostic and statistical manual of mental disorders, femoral head, Legg–Calvé–Perthes disease, osteonecrosis

Legg–Calvé–Perthes Disease (LCPD) is a juvenile hip disorder occurs secondary to blood supply interruption of the femoral head causing osteonecrosis. Over time, new blood vessels infiltrate the necrotic bone, and the tissue starts healing with a loss of bone mass and weakening of the femoral head.[1] It is estimated that the incidence of LCPD is from 4 to 290 in a million children younger than 15 years. Significant variability is found when considering the extent of LCPD within ethnic groups, and it is found to be more in lower socioeconomic classes. The classical age at presentation is usually around 4–8 years (average 6.5 years), except for children from the Indian subcontinent (average 9.5 years). The affected children exhibit slow bone maturation, mild short stature, reduced skeletal age, disproportionate growth, and low birth weight.[2] Patients with LCPD usually present with intermittent leg, thigh, and groin pain, which increases with movement. The diagnosis can be made with proper history taking, physical examination, and imaging studies.[1]

Attention deficit hyperactivity disorder (ADHD) is a neurodevelopmental syndrome. It has a continual pattern of impaired attention or inattention and hyperactivity-impulsivity that disrupt general well-being and functional development. It is usually diagnosed in childhood and may last through adulthood.[3] ADHD has three subtypes, which are the inattentiveness type, hyperactivity/impulsiveness, and the combined type.[3] Worldwide, ADHD affects about 5.3%–7.1% of children.[4] The prevalence of ADHD in Saudi Arabia has been investigated in multiple studies with a great variation in results. ADHD prevalence in Saudi Arabia was illustrated by Alqahtani who collected data of 708 primary school students in Saudi Arabia attending first to third school grades (7–9 years old), using the fourth Diagnostic and Statistical Manual of Mental Disorders (DSM-5) criteria of ADHD. The results showed that ADHD affected 2.7% of the sample. The prevalence was 2% for the inattention type, 1.4% for the hyperactive/impulsivity type, and 0.7% for the combined type.[5] In 2015, a study conducted in Riyadh city reported an 8.4% incidence of ADHD,[6] this conclusion is much higher compared to Alqahtani's study in Riyadh also, which reported a 2.7% incidence.[5] Furthermore, a third study done in 2013 conducted in Jizan city reported ADHD incidence of 13.5%,[7] this result was relatively close to another study conducted in 2013 in Jeddah city, which concluded that the incidence was 11.6%.[8] Also in 2012, a study conducted in Alkhobar city reported a 3.5% incidence, an important point to mention in this study is that it included only female school children.[9] In comparison, we found one study included only male school children that was conducted in Dammam city and it concluded an overall prevalence of combined ADHD of 16.4%.[10] Although this study reported a higher prevalence than the worldwide known prevalence of 3%–5%, it still carries good weight since the sample that was used has over 1200 males school students. One last study that we found worth reporting is a study conducted in 2016 in Abha. This study was done on school-age children who were born preterm and reported that the prevalence of ADHD among preterm children was high, with a result of 34% for the inattentive type and 11.3% for the hyperactive-impulsive type.[11]

There are multiple potential causes of ADHD including biochemical, genetics, physiological, and behavioral factors.[12] The multiple causes make the diagnosis of ADHD a complex matter. It requires a careful assessment of a number of specific symptoms in a variety of life settings. The fifth edition of the DSM-5 comprises criteria to diagnose ADHD. The criteria aim to unify standards between communities.[3] They clarified that people with ADHD show a continual pattern of inattention and hyperactivity-impulsivity that disrupts general well-being and functional development. The criteria consist of two domains of symptoms. The first one lists the symptoms of inattention, and the second one lists the symptoms of hyperactivity-impulsivity.

Based on the literature review, previous studies had highlighted that there is an association between ADHD and LCPD.[13],[14] In 1993, Loder et al. reported that there is a high incidence of ADHD among LCPD patients. The incidence was 33% compared to 3%–5% in the normal population.[13] Studying the relationship between ADHD and LCPD is important as ADHD prevalence in Saudi Arabia is high (16.4%) in Saudi males according to Al Hamed et al., when it is 5.3%–7.1% worldwide.[4],[10] The current study aims to investigate the relationship between ADHD and LCPD among young Saudi population.

The case group included all Saudi cases diagnosed with LCPD between the ages of 4 and 19 years from both genders using the database of our institution. While the control group was chosen from the vaccination clinic (vaccinated children and their companions) to ensure that there is no medical reason for the hospital visit. Individuals under any psychiatric medication that influence the attention and activity were excluded from the study. The samples' age ranged from 4 to 19 years old. The minimum included age in our study was 4 years old, and the maximum was 19, this is due to the guideline of the American Academy of Pediatrics, which limits the age of diagnosing ADHD to 4–18 years old.[15] However, we included one LCPD case of 19 years old, as he was diagnosed long before that age, he was only seen at our hospital at 19.

Each subject in both groups was asked to visit the clinic for one time and undergo a clinical assessment, evaluation for ADHD, a detailed history was taken, and consents were obtained from the parents. Two instruments were used to collect data from children's parents from both groups. First, a data collection sheet that included demographical data such as date of birth, gender, height, and weight and the affected side in the case group. The other instrument measured the inattention and hyperactivity of both groups using the latest diagnosis criteria for ADHD by DSM-5, which was assessed by the researchers.[3]

After that, all collected data were coded into an Excel sheet and analyzed using SAS 9.4. Categorical data were described by frequencies and percentages, such as gender and affected side among LCPD patients, while numerical data were presented as a mean and standard deviation, such as age and body mass index (BMI). From the ADHD diagnostic test, any child who scored at least six symptoms out of nine in each domain was considered as a positive diagnosis. BMI was calculated from the weight and height of the participants.

The odds ratio (OR) of ADHD was calculated for LCPD against non-LCPD. Logistic regression was used to assess the clinical characteristics and demographics that could be risk factors for LCPD.

Chi-squared test was used to assess the association between ADHD and LCPD. Fisher's exact test was used when the expected cell count was <5. ORs of ADHD and subdiagnoses, as well as 95% confidence intervals, were reported.

In the case group, we found that it has a significant male predominance (78%).

Table 1: Descriptive variables and their association with Legg-Calvé-Perthes disease 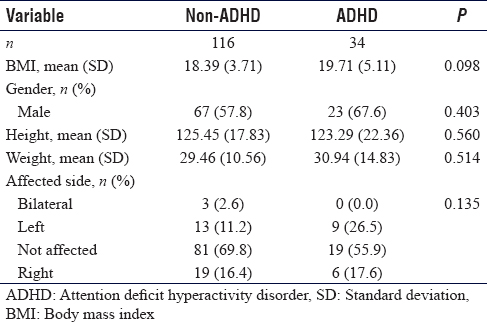 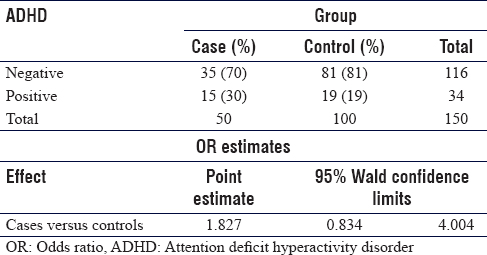 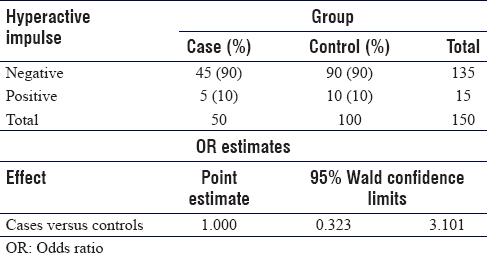 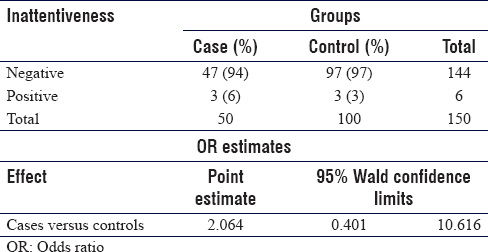 The correlation between ADHD and LCPD is not a new one; in fact, this possible relation has been addressed in several studies that have highlighted the increased incidence of ADHD among LCPD patients.[13],[14] For example, in 2014, a study conducted in Sweden by Hailer and Nilsson, which compared 4057 individuals with LCPD to a matched sex, age, and region control group of 40570 individuals without LCPD, reported a 1.5-fold higher risk of ADHD in LCPD group compared to their sex- and age-matched individuals without LCPD.[14] An older study by Loder et al., reported a 33% incidence of ADHD among LCPD patients compared to 3%–5% in normal population, they also suggested a correlation between ADHD and LCPD in regard to certain epidemiological factors, which were similar between the two disorders.[13] However, these two conclusions were different from ours, which showed a difference that was not significant between the two groups (control and case groups) regarding ADHD incidence, although the incidence in our case, group was almost similar to their LCPD patients' incidence (30% vs. 33%) and it was almost 1.5 times higher as it was 30% in the case group compared to 19% in the control group similar to the Swedish study.[13],[14]

On the other hand, we found a study that supports our results showing no significant difference in ADHD incidence between the case group and the control group. This study was conducted in 2014 in Turkey by Türkmen et al., and it stated that the difference in the rate of ADHD was not statistically significant among the three groups studied, which were case group, trauma group, and normal group.[16]

The current study, also showed an average BMI of 18.07 kg/m2 in case group, compared to 18.99 kg/m2 in the control group, representing a P > 0.19 with no statistically significant difference between the two groups. This result was similar to what Türkmen et al. study reported, in which the average BMI was 20.83 kg/m2 in LCPD group, 19.52 kg/m2 in trauma non-LCPD group, and 19.35 kg/m2 in nontrauma non-LCPD group with no statistically significant difference between the groups.[16]

In our study, we faced some limitations. Since it is a case–control study, it can have a recalling bias, as our questionnaire asked about past events before the diagnosis of LCPD or the diagnosis of ADHD in older children. Another limitation we had was the small sample size since we had only 50 cases diagnosed with LCPD.

Finally, we recommend future researchers studying this area to do a prospective study with multiple centers in different regions in Saudi Arabia, which may increase the sample size and include other variables to be studied, such as, the dietary habits for children, history of trauma, second hand smoking, and the socioeconomic status in the family.

Institutional review board's ethical approval was obtained from King Abdullah International Medical Research Center (KAIMRC), and the patient's data were dealt with full confidentiality, the data were kept on a file in a secure location in work PC's only.

MAM conceived and designed the study, conducted research, provided research materials, and collected and organized data. SHS analyzed and interpreted data. MAH wrote initial and final draft of the article and provided logistic support. SSM, TAQ, ZSS and BMD has helped in data collection, reviewing the statistics and contributed in writing and editing the paper. All authors have critically reviewed and approved the final draft and are responsible for the content and similarity index of the manuscript.