Objectives: With the wide use of swaddling, there is a concern that swaddling could potentially increase the risk of developmental dysplasia of the hips (DDH). A number of epidemiological studies from around the world have confirmed the association of improper swaddling with the lower limbs in adduction and extension with an increased risk of DDH, which is one of the common disorders in Saudi Arabia. This study aims to assess the prevalence of swaddling and the awareness of the females in Saudi Arabia about the correct method of swaddling and its relationship to DDH. Methods: This is a cross-sectional study, conducted using an online self-reported validated questionnaire. Results: The study involved 2631 adult females, 61% of them have children, out of which 91.3% used swaddling. Most of the ladies learnt how to swaddle from their family or friends while only 4% learnt from the health-care providers. More than 77% of the participants are not aware of the negative effects of swaddling on children's hips and around 63% did not know the correct swaddling method. 7% of them will use swaddling even if they know that it may harm their children. Conclusions: Awareness level among females in Saudi Arabia is suboptimal. Health-care providers should explain swaddling effects and demonstrate the technique for hip-friendly swaddling during ante- and post-natal care and in the media to reach all future mothers.
Keywords: Awareness, dysplasia of the hips, developmental dysplasia of the hips, mehad, Saudi Arabia, swaddling

Many mothers find the traditional practice of swaddling (mehad) is comforting, can reduce crying, and improve sleeping patterns in newborns. With the widespread use of swaddling, there is a concern among pediatricians and pediatric orthopedic surgeons that swaddling could potentially increase the risk of developmental dysplasia of the hips (DDH) and other newborns problems as Sudden Infant Death Syndrome.[1]

Several risk factors are associated with DDH including female gender, breech delivery, being the first pregnancy and a family history of DDH. However, prenatal and postnatal mechanical factors are also important.[2] A number of epidemiological studies from around the world have confirmed that the improper swaddling of infants, especially when using bands (which intensify the swaddling tightness) with lower limbs in adduction, and extension is associated with an increased risk of DDH.[3],[4] In an experimental study Wang et al. found a significant increase in the prevalence of hip dislocation after applying surgical tape to neonatal rats to simulate the effect of straight-leg swaddling in humans.[5]

DDH is one of the common disorders in Saudi Arabia with the exact incidence rate still unknown. The only work among Saudi population was done by Mirdad [6] and showed that the incidence of dislocated hips that needed intervention was 3.5/1000 live births. However, this figure seems much less than the true incidence of hip instability and dysplasia in the country, as many will go unnoticed to adolescence (present as dysplasia or subluxation) and many will correct spontaneously, especially the mild cases that had favorable circumstances.[7] In Africa, the incidence rate is 0.06/1000 live births.[8] It is notable that DDH is rare among Chinese and Nigerians newborns where infants in these cultures are carried with hips in abduction position, which is the opposite of the swaddling position.[6],[9],[10] DDH is also very rare in countries such as Thailand, North Korea, and Sri Lanka where swaddling is not used.[11],[12] In Japan, at a time, when traditional swaddling was used to keep the newborn's lower limbs in extension, the incidence of DDH was around 5%. A public campaign to switch to wrapping techniques that encouraged hip flexion and abduction led to DDH rates falling to less than 0.4%.[13] In Qatar, the incidence of sonographic hip dysplasia was 20%, which was dropped to 6% after implementation of an awareness program demonstrating the risks of swaddling.[14]

The importance of swaddling comes from the fact that increasing the incidence of DDH can lead to degenerative hip disease which is a leading cause of early arthritis of the hip. In Norway, it accounts for 20% of patients requiring total hip replacement in patients younger than 40 years.[15]

This study aims to assess the prevalence of swaddling and the awareness of the females in Saudi Arabia regarding swaddling and its relationship to DDH. This might help in modifying improper practices and encouraging a hip-friendly swaddling, which will probably lead to a significant decrease in the incidence of DDH in Saudi Arabia.

This is a cross-sectional study, conducted through an online self-reported Arabic questionnaire, consisted of two sections. The first section dealt with the sociodemographic characteristics of the participants (age, education, and marital status) and questions to assess the use of swaddling. The second section explored the participants' awareness of the relationship between swaddling and DDH, the correct way to swaddle, and a question to figure out whether or not they would use swaddling even if they knew about its risks. The validation process was performed through sending it to six pediatric orthopedic consultants for review. The questionnaire was adapted according to their notes and comments. It was then used as a pilot study on 21 participants to explore if there were any remaining ambiguities in the questionnaire. The questionnaire was further modified according to the difficulties and notes of the participants until we arrived at the final questionnaire, which was used for the current study. Ethical approval was obtained from the Research Ethics Committee of the College of Medicine. The questionnaire was received by 2733 females above 18 years of age, randomly selected through a process of E-mailing and electronic texting of the online link of the questionnaire to the candidates. A number of 102 of the candidates did not meet the criteria and were excluded. Our inclusion criteria involved all females living in Saudi Arabia above 18 years of age. We excluded all males and excluded females below 18 years of age. The data were analyzed using the Statistical Package for the Social Science program (Version 20.0, SPSS INC, Armonk, NY, USA). The Statistical analysis test used is cross-tabulation Chi-square.

The study included 2631 females who satisfied the inclusion and exclusion criteria. Demographic data of the participants are shown in [Table - 1]. About 61% of the participants (1606) have children, out of which 91.3% (1471) used swaddling. A quarter of the ladies who swaddled their babies used it for more than 4 months [Table - 2]. The tightness of the swaddling was with medium strength in 77.9% of the answers (35.1% with a band, 42.8% without a band), 13.5% allowed for free movement with weak swaddling, and only 8.6% swaddled their children strongly with a band to make the legs straight. The duration of swaddling was 1‘5 h/day in 40% of the answers. In addition, 49.5% of respondents swaddled for 6‘18 h/day while the rest (10.5%) used it for more than 18 h/day. Most of the respondents (92.7%) learnt how to swaddle from their families or friends, with only 4% learning from a health-care provider. The participants' awareness of the risk of swaddling and the correct method of swaddling is shown in [Table - 3]. A 6.9% of the participants said that they would use swaddling even if they knew that it may cause harm to their children [Table - 4]. [Table - 5] and [Table - 6] shows the relationship between ages and education level of the participants and the use of swaddling after knowing its negative effects. 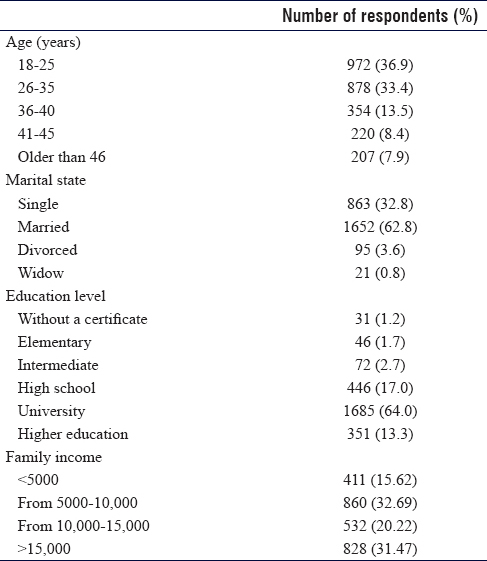 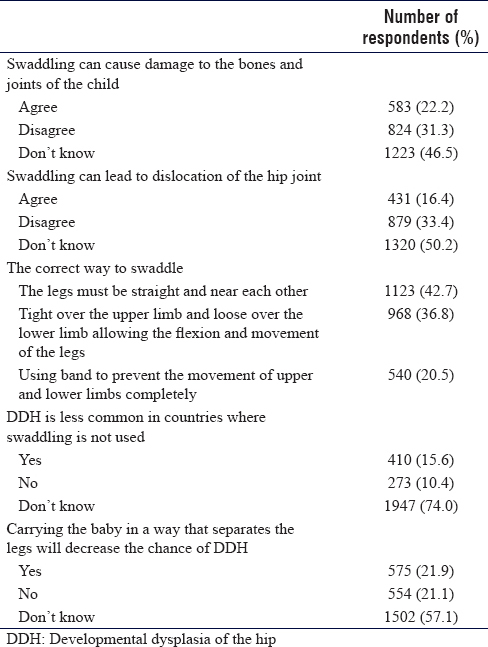 Table 3: Awareness of the participants regarding the relationship of swaddling to developmental dysplasia of the hips

Table 4: Use of swaddling after knowing its negative effects

Table 5: The relationship between age of participant and the use of swaddling after knowing its negative effects

Table 6: The relationship between education level of participant and the use of swaddling after knowing its negative effects

Our findings suggest that the awareness of the correct method for swaddling and the harmful effects of poor swaddling techniques is suboptimal among females in Saudi Arabia. More than 77% of the participants are not aware of the effects of swaddling on children's hips. Around 63% did not know the correct way of swaddling.

Only those with higher education had more correct answers regarding swaddling as a possible cause of negative effect on hips with a significant level of P ≤ 0.01.

Swaddling by itself does not cause DDH, but it does harm the unstable or dysplastic hips which are not uncommon in newborns in Saudi Arabia and unfortunately, that can only be diagnosed through ultrasound hip screening. Noting that there is a deficiency in the DDH screening programs in Saudi Arabia,[2],[6],[14],[17],[18] Which means that using swaddling in newborns who were not screened for DDH is dangerous as it may change an unstable hip or mildly dysplastic one into a frank subluxation or dislocation.

It is worth noting that swaddling alone cannot affect the perfectly normal hips. It can only affect congenitally unstable or dysplastic hips, and unfortunately, that can only be diagnosed through ultrasound hip screening.[14],[17] If families wish to swaddle their infants, they need to be aware of the need to allow flexion and abduction of the hips. This will provide protection for the safe development of hips or at least screen the hip with ultrasound to exclude dysplasia. Physicians should ask about swaddling practices, inform the families about the dangers of swaddling and pay close attention to the hip examination of infants who are tightly swaddled, especially when there are other risk factors.

Knowing the level of population awareness and practice allows us to address the problem more effectively and raise the awareness level, which will hopefully lead to a significant decrease in DDH incidence in Saudi Arabia as seen in the Japanese and the Qatari campaigns that managed to reduce the incidence of DDH in their countries.[13],[14]

One subject that remains to be explored is the attitude and the level of awareness among those primary health-care providers who have direct contact with the mothers as they could play an important role in teaching new mothers.

The limitation of our study was mainly the limited sampling and respondent availability as we used an online questionnaire. Online questionnaire was used to ease the delivery of the questionnaire knowing that it would cause some inherent bias for the highly educated respondents. However, we believe that in these days, people with low educational level are greatly engaged with the internet access through a variety of electronic devices.

In conclusion, the awareness level among females in Saudi Arabia is suboptimal. Health-care providers should explain swaddling effects and demonstrate the technique for hip-friendly swaddling during ante- and postnatal care and in the media to reach all future mothers.

The authors would like to show their gratitude to Prof. Khalid I. Khoshhal, Professor of Pediatric Orthopedic Surgery, for his supervision, review, and comments, and for Dr. Kholoud Alzain, Pediatric Orthopedic Consultant, for her help in data collection and review of the questionnaire although any errors are own and should not tarnish the reputations of these esteemed persons. The authors want to thank also the other Pediatric Orthopedic Consultants who reviewed the questionnaire. The authors would also like to thank Dr. Raghdah O. Mulla, General Dentist, Alaa S. Alrehaili, Alhanouf A. Almusallam, Zahrah I. Alsharif, Razan A. Almuzaini, Ghaidaæa S. Almohammadi, Rehab O. Alhujaili, Rawan A. Alhoraibi, Areej M. Alawfi, Raghad A. Alshaya, Halah I. Abuzaid, and Shoroog H. Alahmadi, Medical Students, for their efforts in the collection of the data.

All authors participated in conceiving and designing the study, reviewing the literature, and collecting and analyzing the data. HHA and BMH prepared the manuscript. All authors have critically reviewed and approved the final draft and are responsible for the content and similarity index of the manuscript. Authors testify that all persons designated as authors qualify for authorship and have checked the article for plagiarism. If plagiarism is detected, all authors will be held equally responsible and will bear the resulting sanctions imposed by the journal thereafter.