Objective: This study aimed to identify burnout syndrome prevalence among orthopedic surgery residents from different levels in different training centers of Saudi Arabia.
Methods: A survey was sent to all orthopedic surgery residents in the Central, Western, and Eastern regions of Saudi Arabia in late September/early October 2018. The Maslach Burnout Inventory for Medical Personnel was used as a data collection tool. A three subscale questionnaire based on emotional exhaustion, depersonalization, and personal accomplishment determined the level of burnout syndrome. High, moderate, or low were the parameters reported after calculating the score of each subscale.
Results: A total of 142 out of 301 residents completed the survey (response rate: 47.2%). The majority of the sample (90.1%, n = 128) were male. The sample had a mean of 6 on-call days per month, 2 clinic days per week, 2.3 operation days per week, and slept a mean of 5.5 h per night. More than two-thirds of the sample (68.3%) were not satisfied with their work-life balance. Around one-fifth (21.8%) of residents would not choose orthopedic surgery again as career choice and less than half of them (43%) would not choose medicine again for their graduate-level study. The results indicated that more than 56.3% of the sample scored positive for burnout syndrome.
Conclusion: The study demonstrated that more than half of the studied orthopedic surgery residents in Saudi Arabia experienced burnout syndrome, which may have negative consequences for patient care, physician's efficacy, and the health-care system.
Keywords: Burnout, depersonalization, Maslach Burnout Inventory, personal satisfaction, resident well-being

Burnout syndrome is a mental state in which the victims suffer from the triad: emotional exhaustion (EE), depersonalization (DP), and a sense of reduced personal accomplishment (PA) which, in combination, lead to decreased efficacy and potency at work.[1],[2] Moreover, burnout syndrome can present as long-standing stress in addition to symptoms of anxious state, fatigue, sleep disturbance, and loss of interest in personal achievements during practice.[2] The medical field is considered as one of the most stressful and challenging human service occupations, and a number of previous burnout-related research studies focused on physicians and surgeons in particular.[3],[4] As reported by several previous studies, the prevalence of burnout syndrome is higher in surgeons compared to the general population and many other medical specialties.[2],[3],[4] Burnout syndrome among health-care providers can result in a substandard quality of patient care, increasing the incidence of medical errors and leading to poor health outcomes.[5],[6] It is crucial to estimate the current prevalence of burnout syndrome among residents in the surgical field. It is known that trainees in residency programs are highly susceptible to burnout syndrome because of the constant evaluation of their clinical performance and the long working hours.[6],[7],[8],[9] The most widely accepted and validated standard tool for burnout assessment in physicians is the Maslach Burnout Inventory (MBI) for Medical Personnel.[1] This tool assesses several aspects of the job including work environment, physician–patient relationship, and lifestyle.[1] Orthopedic surgery residents are highly susceptible to burnout syndrome.[10],[11],[12] According to previous studies, Sargent et al. surveyed 384 US orthopedic surgery residents and 264 faculty members and found that 56% of the residents scored a high level of burnout.

To the best of our knowledge, there is no study that specifically evaluated burnout syndrome in orthopedic surgery residents who are training in the three main regions of Saudi Arabia. This present study aimed to determine the prevalence of burnout syndrome among orthopedic surgery residents from different levels of residency and to understand the factors associated with developing this syndrome.

A cross-sectional study was conducted in late September/early October 2018 using the MBI for Medical Personnel[1] that was sent to all orthopedic surgery residents in Saudi Arabia (New residents that joined the program in October were not included in the study). The questionnaire consists of three categories: EE, DP, and PA. A 7-point Likert scale ranging from 0 to 6 was used for each question in these categories (the total number of questions was 22). High, moderate, or low were the parameters reported after calculating the score of each subscale. Residents having EE score of 27 or more, DP score of 13 or more, and PA score 31 or less are in highly indicative chance of being burned-out based on the MBI Manual.[1] Demographic data were also used to find their correlation with burnout syndrome. The demographic data collected were gender, marital status, region of the training program, residency level, how frequent they have clinics per week, how frequent they have operation days per week, how many days they are on-call per month, and average sleep hours per night. Moreover, residents were asked at the end of the questionnaire if they would have selected medicine again as an academic degree and orthopedic surgery again as a profession as well as if they are satisfied with their life-work balance. Saudi Commission for Health Specialties provided the communication database for all orthopedic surgery residents. Each resident was invited to participate in the study through an E-mail letter labeled with a unique number. Informed consent was distributed with the E-mail explaining that participation was voluntary with no consequences for nonparticipation. A reminder letter was sent to those who did not respond. To minimize bias, both of the invitation E-mail and the questionnaire did not specify the word “burnout.” Microsoft Excel was used to enter the data then transferred to Statistical Package for Social Sciences (IBM Corp. Released 2011. IBM SPSS Statistics for Windows, Version 20.0. Armonk, NY, USA: IBM Corp.) for analysis and management. Frequencies and percentages are used to describe the categorical data while mean and standard deviation are used to describe the numerical data. Associations between categorical variables were determined by Chi-square. Spearman's Correlation Coefficient investigated the association between EE and all continuous variables. The logistic regression model was performed with the dependent variable is residents' burnout. Furthermore, reporting the results were by odds ratios (ORs) with 95% confidence intervals. P < 0.05 was considered statistically significant.

The total number of residents who completed the questionnaire is 142 out of 301, with a response rate of 47.2%. The age of the sample ranged from 25 to 37 years old, with a mean age of 28.4 (±2.5) years. The majority (90.1%) were male. More unmarried residents (52.8%) participated in the study than married residents. The participated residents were distributed similarly between level 1 to level 5 with the exception of level 2 (30.3%) which accounted for the majority [Table - 1]. The distribution of the sample by region was highest (40.8%) in the Central region and lowest (29.2%) in the Eastern region [Table - 1]. Furthermore, the sample had a mean of 6 on-call days per month (range 3–9), two clinic days per week (range 1–4), and 2.3 operation days per week (range 1–6). The sample had an average of 5.5 h of sleep per night. Two-thirds (68.7%) of the sample was not satisfied with life-work balance. Only one-fifth of the residents (21.8%) would not have chosen orthopedic surgery again as a career choice, and less than half (43%) would not have chosen medicine again for their graduate-level study. The sample descriptive results are displayed in [Table - 1]. 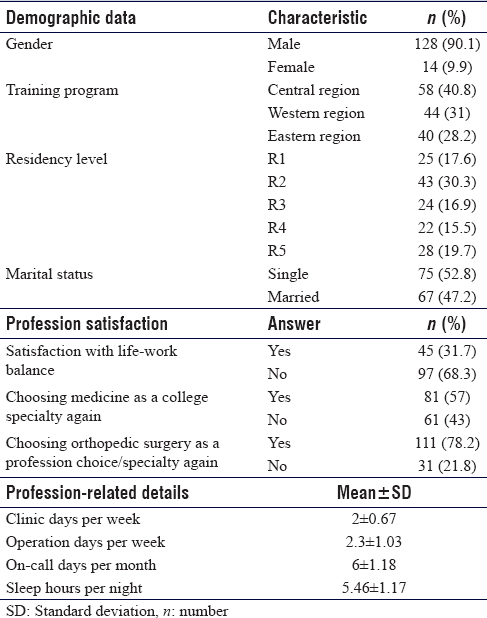 Table 1: The demographics of the sample 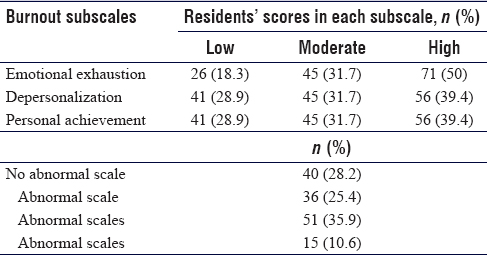 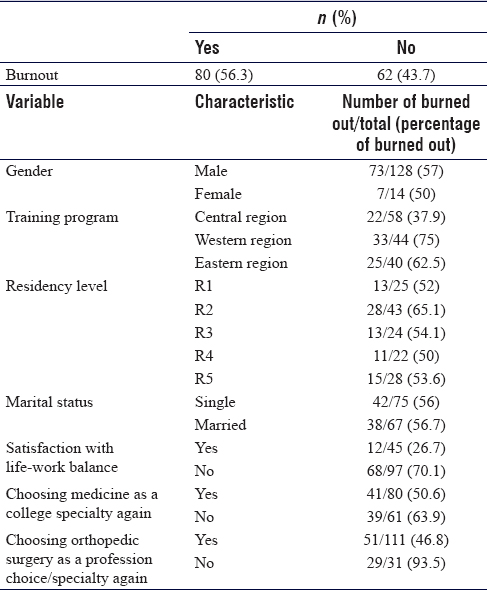 [Table - 4] displays the Spearman correlations with the EE subscale. Several variables such as average number of sleep hours per day, satisfaction with personal and professional life balance, residency level, and satisfaction with orthopedic surgery specialty were inversely correlated with EE level. 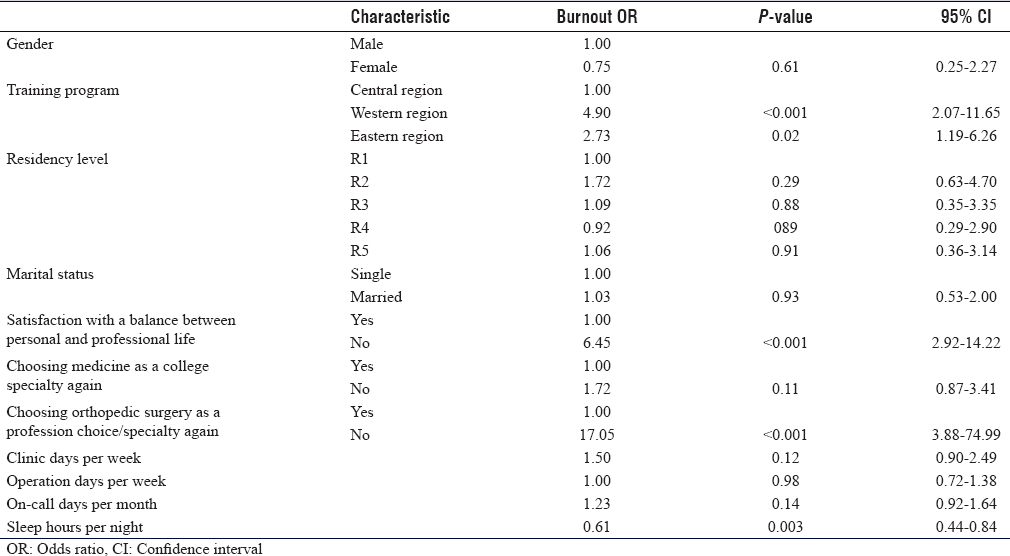 In the present study, 50% of the sample had a high level of EE, and a high DP was noted in 39.4%. Having both a high EE and DP status were reported in 33.1% of orthopedic surgery residents. Based on the MBI Manual,[1] the overall prevalence of burnout syndrome was 56.3%. The high level of EE and DP burnout symptoms are consistent with those reported in multiple previous studies using the MBI. For instance, Sargent et al. evaluated the prevalence of burnout symptoms among 384 orthopedic residents in the United States and found that the levels of high EE and DP were 32% and 56%, respectively.[10] An Australian study, with 51 orthopedic residents showed a high EE (45%) and a high DP in 35% of the sample.[11] A recent study conducted with 107 orthopedic residents in France reported 26.2% with a high EE and the majority (63.6%) with high DP.[12] As discussed earlier, Saudi orthopedic surgery residents displayed elevated levels of high EE and DP symptoms, highlighting the necessity for rapid investigation and intervention.

Several studies evaluated burnout syndrome among Saudi residents in other medical specialties. For example, the burnout syndrome prevalence was estimated to be high among otolaryngologist residents in Saudi Arabia, with 45% expressing both high EE and high DP scores.[13] In a recent study with Saudi plastic surgery residents, the prevalence of burnout among them was similarly high, with 47% scoring high EE and high DP.[14] Another study, focusing on residents and consultants in different medical and surgical specialties conducted in one tertiary hospital in Saudi Arabia, reported that the majority of general surgery residents (76%) displayed burnout.[15] In comparison, this current study found a consistently high prevalence (56.3%) of burnout syndrome in the Western, Eastern and Central regions of Saudi Arabia. All these studies highlight a growing concern in the medical field. There is an urgent need for a comprehensive study to evaluate burnout syndrome effects among practicing physicians in Saudi Arabia and to find effective solution for such a concerning problem.

There are several limitations to this study. First, only 47.2% of the invited orthopedic surgery residents completed the survey. However, this response rate was higher than those reported by the previous similar studies.[10],[11],[12] Second, this type of survey is at risk of selection bias, which may lead to an overestimation of the burnout syndrome prevalence, as residents experiencing burnout symptoms might be more likely to participate.

The study has demonstrated that more than half of the orthopedic residents in Saudi Arabia were experiencing burnout syndrome, which may result in negative consequences related to patient care, the physician's efficacy and the health-care system. Therefore, improved cooperation between the training centers and the Saudi Commission for Health Specialties is urgently required to investigate and manage these challenges.

The study emphasizes the need for research to investigate the risk factors and reasons to decrease the prevalence of burnout syndrome and prevent negative sequelae. Moreover, additional research should focus on effective intervention methods to prevent burnout syndrome at both an individual and institutional level.

Authors are greatly thankful for the help of Dr. Mohammed Alhassan in contacting the residents in the eastern region.

KA and FA conceived and designed the study and provided research materials. FA and FE and AAS collected and organized data. FF and AAH analyzed and interpreted data. FA and FF wrote initial and final draft of the article. All authors have critically reviewed and approved the final draft and are responsible for the content and similarity index of the manuscript.