Comparison of musculoskeletal pain prevalence between medical and surgical specialty residents in a major hospital in Riyadh, Saudi Arabia

Objectives: Musculoskeletal disorders are an occupational hazard between physicians. Physicians whose practice involves physical undertakings, such as surgeons, are prone to musculoskeletal pain, which can lead to decreased productivity. This study aimed to compare surgical and nonsurgical specialties musculoskeletal pain prevalence, as well as assess whether certain factors contribute to their pain. Methods: A cross-sectional study that utilized a self-administered questionnaire handed out to 140 conveniently selected surgical and nonsurgical residents at King Abdulaziz Medical City, Riyadh. The questionnaire included a demographics section and a section inquiring about nine anatomical areas derived from the Nordic Musculoskeletal Questionnaire. Results: The mean age was 27 years old, and 79% were male. Surgical residents comprised 39% (n = 55) of the participants. Of all the residents, 82.9% (n = 116) suffered from a musculoskeletal complaint, with the majority involving the lower back (53%). Surgical residents were more likely to take time off work (16% vs. 4%) and attributed their pain to their profession (38% vs. 15%). Lower back pain was related positively to body mass index (P = 0.04). Multivariate logistical regression revealed that being a surgeon (odds ratio [OR] = 5.08 and confidence interval [CI] = 0.27–94.14) and spending time doing interventional procedures (10 h; OR = 0.97 and CI = 0.05–18.61) are predisposing factors to musculoskeletal pain. Conclusion: Ergonomic changes are needed to enhance productivity and decrease time off work. Surgical residents need to be aware of the risk of experiencing musculoskeletal pain and be educated on ways to avoid or cope with their pain.
Keywords: Ergonomics, lower back pain, nordic musculoskeletal questionnaire, occupational hazards, orthopedics, shoulder pain

Occupational risks are hazardous events encountered in the workplace. These may include chemical, biological, psychosocial, and physical hazards.[1] Musculoskeletal disorders a term defining complaints, symptoms, or pains to the musculoskeletal system, which can range from mild and intermittent to severe and chronic causing morbidity.[2],[3] To add, they are one of the most stressing issues faced by health-care workers, especially surgeons, that maintain a still posture for a prolonged time.[4],[5] A study conducted in 2011/2012 showed an estimated 1.1 million individuals suffered from occupational hazards with musculoskeletal disorders being the second most common cause of the following mental disorders.[6] Studies concerned with the epidemiology of musculoskeletal disorders in health-care providers showed that repetitive bending and twisting, manual handling, abnormal postures, and forceful movements are important predisposing factors to musculoskeletal disorders.[7],[8] A national cross-sectional study done in the United Kingdom by Babar-Craig et al. included 325 ear, nose, and throat physicians, 72% had back or neck pains or both inferring their pains to long microscopic work and bending forward while sitting.[9] Other risk factors, which were similar to general surgeons, included endoscopic procedures, frequent bending, and prolonged still postures.[10],[11] In comparison with medical specialties, a cross-sectional study was done in 2012 in India, which compared musculoskeletal pain prevalence in dentists, surgeons, and physicians. This study found that the highest rates of musculoskeletal pains were among dentists (61%), followed by surgeons (37%) and least in physicians (20%).[11] A study conducted by Auerbach et al. in 2011 revealed that spine surgeons scored higher levels of musculoskeletal pains (disk degenerative diseases and herniation, carpal tunnel syndrome, and lateral epicondylitis) when compared to the general public.[12]

Physical discomforts can be disregarded or ignored by physicians to provide optimum patient care. Physicians are susceptible to bending, twisting, lifting heavy loads, and maintaining an awkward posture for a long time, which is all considered risk factors for musculoskeletal pains.[7],[8],[13] The societal burden of injuries to physicians will be inflicted through their decreased productivity, absence from work, and cost of treatment.[14],[15],[16] In the United Kingdom, 116 million working days were lost from the general population due to musculoskeletal disorders (lower back pain) between 1994 and 1995.[17] In addition, Mollazadeh and Saraei found that of 690 medical personnel in Tehran teaching hospital during 290 working days between 2014 and 2015, 180 participants had sick leaves with a sickness absence rate of 0.011/year and an absence frequency rate of 0.68/year, 18% of them were related to the musculoskeletal system.[18]

In Saudi Arabia, multiple articles were found in the literature on the prevalence of musculoskeletal pains in different specialties of the health-care system. However, studies comparing the prevalence of musculoskeletal pains in surgical to nonsurgical medical specialties were not found. In addition, the literature review did not show any similar local studies. This study would serve as a benchmarking tool for addressing and reducing the physical stressors experienced by both surgical and nonsurgical physician. We aimed to see the differences in the rates of musculoskeletal disorders, between only surgical and nonsurgical residents at King Abdulaziz Medical City due to the fact that consultants were fewer in number to meet the sample size, easier accessibility to residents as opposed to consultants, and vast differences between different consultants ages in comparison to resident during their training. Our results stress the importance of creating an ergonomically safe work environment for surgical and nonsurgical health professionals.

The questionnaire, which was developed by Knudsen et al.,[20] has two main parts: demographics and symptoms sections. The cover page of the questionnaire was an informed consent. The demographics section inquired about age, gender, weight, height, residency level, average number of hours spent doing interventional procedures/operating/week, handedness, most commonly used eyewear, and most commonly employed operating/procedural position. The symptoms section included nine different anatomical areas derived from the Nordic Musculoskeletal Questionnaire (NMQ). These areas are as follows: neck, shoulders, elbows, wrists/hands, upper back, lower back, hips/thighs, knees, and ankles/feet. In case a participant answers negatively toward a certain area, the questionnaire asks to skip to the next area; however, in case of a positive response, the participant was asked further questions about interference with work over the last year, difficulties over the past week, and description of the pain's character (pain, stiffness, weakness, paresthesia, or others). Participants were also asked to rate their pain's severity (mild, moderate, or severe) and whether the participants attributed their pain to their work. The demographic data served as a grouping variable for the study, while the NMQ results served as the outcome variables.

Data were entered into SPSS 20, IBM, Armonk, NY, United States of America. Categorical variables were described as frequencies and percentages. Chi-Square test and logistic regressions were used to assess the relationship between the outcome variable (categorical variables for musculoskeletal pain) and baseline characteristics. 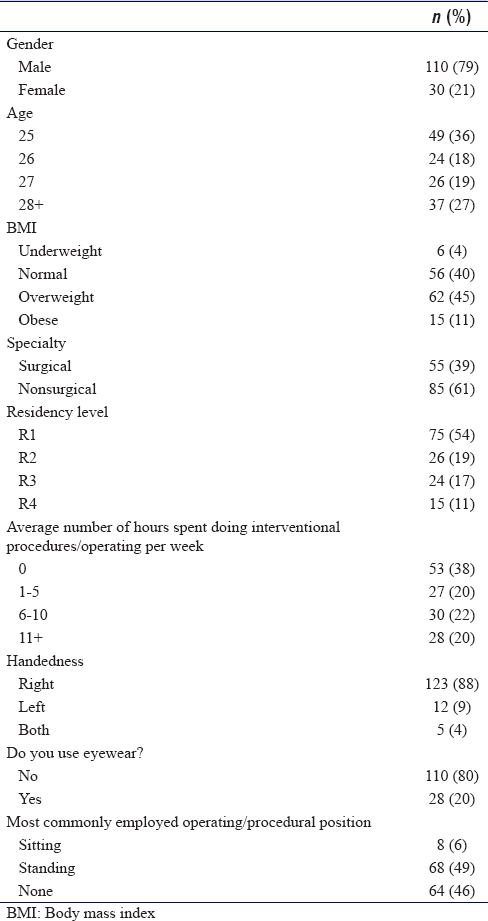 Reports of pain in all areas of interests are depicted in [Chart 1]. The majority of residents who suffer from pain suffered from either lower back (53%) or neck pain (39%). When asked to characterize exactly what they felt, 64% reported feeling general pain, and 18% felt stiffness in the affected areas. Only 26% had symptoms in the 12 months before their participation in the study and 24% had symptoms 7 days prior. While both groups complained of musculoskeletal pain in varying degrees, there was a significant difference when surgical and nonsurgical groups were compared, specifically in the complaint of knees (P = 0.001), shoulder (P = 0.01), wrists/hands (P = 0.02), elbow (P = 0.02), and hips/thighs (P = 0.04), as shown in [Table - 2]. 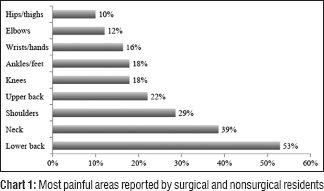 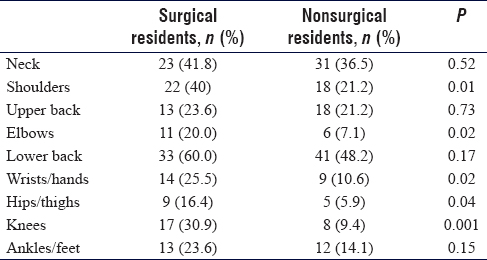 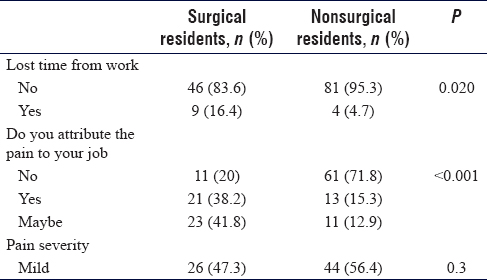 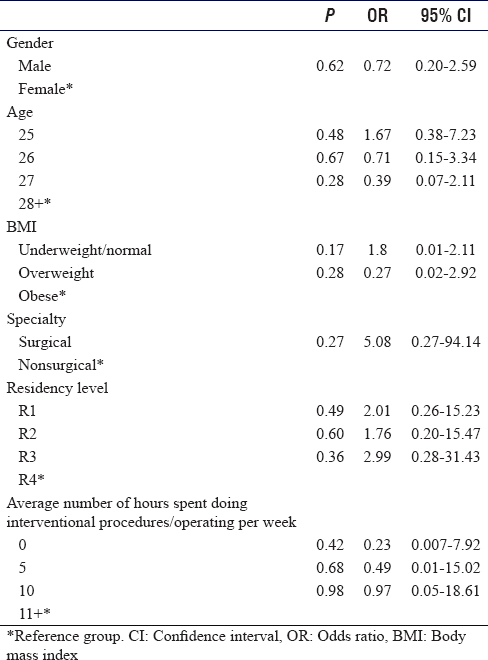 In our cross-sectional study, we found that 83% of the study population had at least one painful or stressing musculoskeletal complaint with lower back and neck pain being the most common complaints, respectively. Compared with a previous article on a similar population, elbow pain and back pain were the main complaints, respectively.[23] Our population's most common musculoskeletal complaints (lower back and neck) were similar to Rambabu and Suneetha's reports in both surgical and nonsurgical medical professions.[11]

Our survey results were comparable to previous studies, notably in our surgical population. Knudsen et al. reported that orthopedic surgeons complained of musculoskeletal pains specifically in the neck (59.4%), lower back (54.8%), upper back (35.5%), and shoulders (34.4%), whereas our surgical residents reported pains in the lower back (60%), neck (41.8%), shoulders (40%), and upper back (23.6%).[20] Auerbach et al. found comparable results when surveying spine surgeons' musculoskeletal complains as follows: lower back (62.2%), neck (59.4%), and shoulders (48.5%). These results are of concern due to our population being younger residents in their early career stages.

Occupational musculoskeletal comorbidities are a prevalent issue as reported in our study and numerous other articles. It is also the cause of chronic pains, loss of working days, and care seeking. Even though no resident suffered a potentially career-ending injury in our study, which can be explained by the young age of our study population, it was the cause of multiple absenteeism from work. Of all the surgical residents, 16% had days lost from work and more than a third of surgeons attributed their complaints to their occupation compared to 4.7% of nonsurgical residents. The nonsurgical population were similar to Rambabu and Suneetha's medical population regarding time lost from work, 6% versus our population's 4.7%; however, the surgical population was almost double of ours, 29% versus 16%.[11]

Previous literature has suggested that female surgeons have a higher prevalence of musculoskeletal pains than male surgeons. However, these reports had a limited number of female surgeons participating.[5],[26] Adam et al. reported that female gender was associated with approximately double the risk of reported pain in common anatomical sites when assessing the prevalence of musculoskeletal pain among gynecologic surgeons, where female surgeons were nearly 50% of the population.[27] This was very similar to Alsiddiky et al. reporting where female dental practitioners had double the risk of lower back pain.[24] This was also evident across health professionals in general where female health professionals had 1.9 times higher risk for developing musculoskeletal disorders than their male counterparts.[23] However, in our population being a male proved to be not statistically significant protective factor from musculoskeletal pain.

Limitations of the study

As with all convenient sampling studies, this study is highly vulnerable to have biases that both over- and under-represent the overall population as well as selection bias. The sample studied represents residents from one institute; King Abdulaziz Medical City, this may affect the generalizability of our results and may not be representative of other institutes. Finally, equal gender distribution was not achieved in the sample studied and thus might have affected female residents' representation.

Care and ergonomic changes need to be done to the environment in which health-care professionals practice in an effort to enhance productivity and decreased time off work. Surgical residents need to be more aware of the potential risk of experiencing musculoskeletal pain over time and should be educated on ways to avoid or to cope with muscular pain due to work. We recommend that audits, education, and training programs on prevention and coping strategies for musculoskeletal pains should be implemented and compulsory for all health-care providers, as well as providing physical mobility and stretching facility for health-care workers.

Health-care workers are subject to musculoskeletal pain in their work environment. Hence, care needs to be paid to the environment in which health-care professionals practice. Long-term studies combating the limitations of this study may give a better estimate of risk factors and methods of eliminating them to provide a safer work environment, bearing in mind the societal investment put in the health-care systems. Furthermore, expanding on this study by inquiring about other specialties working in the hospital and the areas, they occupy such as wards, laboratories, and clinics.

Ethical approval was granted by King Abdullah International Medical Research Center's institutional review board. All willing participants were given a summary of the study's aim attached to the consent sheet. Complete confidentiality was ensured, and participants were informed that they could withdraw themselves at any given time. Participants also received a faculty member's contact information in case they had any questions regarding the study later on.

AS and SA contrived the idea and designed this study, did the literature review, assembled the questionnaires, gathered the data needed, entered the data on SPSS, wrote the proposal and manuscript. AZ and FZ offered guidance and mentorship, and shared their expertise in the field of orthopedics and musculoskeletal pain. EM did the statistical analysis and aided in interpretation of data. All authors have reviewed and approved the manuscript and are responsible for the content and similarity index of the manuscript.