Swaddling as a risk factor for developmental dysplasia of the hip: Perception and knowledge of family medicine and pediatric residents

Objectives: Several risk factors were associated with developmental dysplasia of the hip (DDH); however, the most common modifiable risk factor is swaddling. Swaddling is a common practice in Saudi Arabia with different unsafe techniques. The aim of our study is to evaluate the awareness and perception of family medicine and pediatric residents of swaddling techniques and their relations to DDH and to look for the effectiveness of an educational intervention on changing their attitude and perception regarding this topic. Methods: This cross-sectional study targeted family medicine and pediatric residents. Each of the participants received a validated questionnaire that was filled before and after a presentation by a pediatric orthopedic consultant regarding different aspects of DDH. Results: The study included 61 residents. Participants' age ranged from 25 to 30 years. There was a significant correlation between the prelecture scores and the practicing period of the physicians (P = 0.003). Results showed that participants' mean knowledge score before the intervention was 3.801 ± 2.18 (out of 8) while after the intervention increased to 6.903 ± 1.12. Conclusion: More than half of the participants lacked the knowledge about swaddling and DDH. The educational intervention significantly increased their knowledge and perception. This clearly means that first-line physicians encountering DDH patients need educational sessions on this topic to manage them safely and educate them about safe swaddling techniques.
Keywords: Awareness, developmental dysplasia of the hip, family medicine residents, pediatric residents, Saudi Arabia, swaddling

Swaddling represents a practice of wrapping a baby in a blanket so that limb movement is snugly restricted to provide warmth and security. Swaddling is a traditional practice among different societies with different techniques.[7] According to a systematic review, DDH can be promoted by swaddling, especially when the legs are not free to bend and flex.[7] The International Hip Dysplasia Institute and the Pediatric Orthopedic Society of North America recommended that infant hips should be positioned in slight flexion and abduction during swaddling with the knees in slight flexion.[8] One of the most common techniques of swaddling used is with extended hips and knees, which is almost the opposite of Pavlik harness, the standard initial treatment of DDH worldwide.[9],[10],[11]

A very high prevalence of hip dislocation was shown in different populations that used swaddling. For example, in some tribes of Native American Indians where they used to carry their babies on a “cradle board” with the hips and knees strapped in forced extension and adduction position. Similarly, in Japan, swaddling was a common practice before 1965, and the incidence of DDH was 1.5%–3.5%. This incidence decreased down to 0.2% when they implemented a national program to stop swaddling.[8]

In Saudi Arabia, it is still a common practice and is known with different names, including “Mihad,” “Tagmeet,” and “Kawfala.” Although the number of cases presented with DDH is considered high and the swaddling practice is very popular in Saudi Arabia, the research publications in this field are extremely limited. One study in Saudi Arabia found that swaddling was used in almost 71% of the patients with DDH.[12] They found that only 25% of those with DDH associated with swaddling were discovered in the 1st month of life. Moreover, only 45% of all the cases were discovered by the family when they noticed an abnormality. These findings demonstrate the importance of swaddling as a risk factor and the lack of the public awareness about its complications.

Only one cross-sectional study found in Saudi Arabia aimed at evaluating the perception of mothers about swaddling techniques. They found that 91% of mothers used swaddling and most of them learned the technique from their relatives and only 4% were trained by a healthcare provider.[13] Family physicians and pediatricians are usually the ones responsible for neonatal screening, well-baby clinic, and education.[2],[11] Residents, in general, are usually the first-line encounter with patients. According to a study done in Los Angeles, USA, <50% of pediatricians educate parents of newborns about swaddling risks if not done properly.[14]

This cross-sectional study was conducted in January 2019. The study aimed to assess the perception of family medicine and pediatric residents toward swaddling techniques and their relationships to DDH. The inclusion criteria for both groups were being a resident at the National Guard Hospital, Jeddah. Respondents were targeted during their scheduled mandatory weekly teaching. Each of the participants received a validated questionnaire composed of 17 questions to be filled in 10 min. Then, papers were collected in sealed envelopes in front of them. After that, a 20-min presentation was provided by a pediatric orthopedic consultant. The presentation was a PowerPoint presentation that included different aspects of DDH, including clinical presentation, risk factors including swaddling, diagnosis, and management. Pictures were provided during the presentation to illustrate the correct and wrong swaddling techniques. Next, they were provided with another questionnaire, with the same knowledge questions that they filled before the presentation and were given 5 min to answer. Then, prepresentation and postpresentation questionnaires were collected for every participant in a sealed envelope. The same steps were done for both groups; family medicine residents and pediatric residents.

The final questionnaire developed consisted of three sections. The first section was about the respondents' demographical data, which included questions regarding their age, gender, specialty (i.e., family medicine or pediatrics), practicing period, marital status, if they have a family history of DDH, or if they have children. The second section consisted of two parts. The first part will be filled if the respondent has children. It was composed of three multiple-choice questions: whether their children were diagnosed with DDH, or they practiced swaddling on them in addition to the method of the swaddling. The second part was a question about if they have ever done swaddling to any child, in addition to the method of the swaddling they practiced. The third section consisted of eight multiple-choice questions that assessed the knowledge of respondents toward DDH and swaddling as a risk factor.

All statistical procedures were performed using Statical package for IBM SPSS Statistics for Windows, Version 18.0. Chicago: SPSS Inc. IBM Corp. Quantitative variables were reported as a mean and standard deviation if normally distributed data or median and 25th and 75th percentile if data were skewed, while qualitative variables were reported as frequency and percentages. Analyses for associations between variables were performed using the Student's t-test and analysis of variance test. Paired t-test and McNemar's test were used to compare the scores difference between preintervention and postintervention results. Values <0.05 were considered statistically significant, with a confidence interval of 95%. 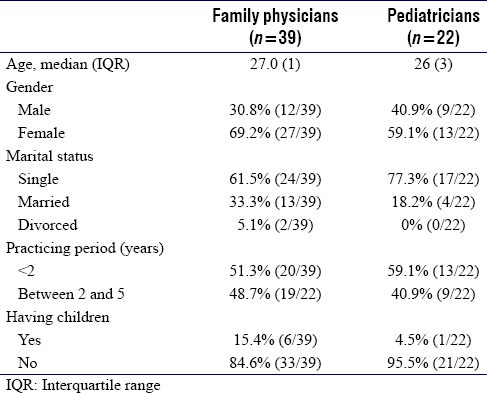 Of the total participants, only 11.5% (7/61) had children; neither of these children was diagnosed with DDH nor had a family history with the disease. About 71.4% (5/7) of the parents had practiced swaddling on their children, and 34.4% (21/61) of the total participant had previously practiced it on other children. [Table - 2] summarizes the used swaddling techniques. There was no correlation between practicing swaddling on their children or any child and their knowledge score. 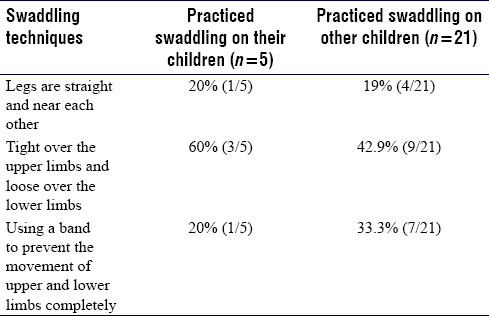 There was a significant correlation between the prelecture scores and the practicing period of the physicians (P = 0.003). Pediatricians had higher prelecture knowledge scores than family physicians (P = 0.033). Further, there was a weak positive correlation between the age and the knowledge scores (r2 = 0.86, P = 0.031) [Table - 3]. 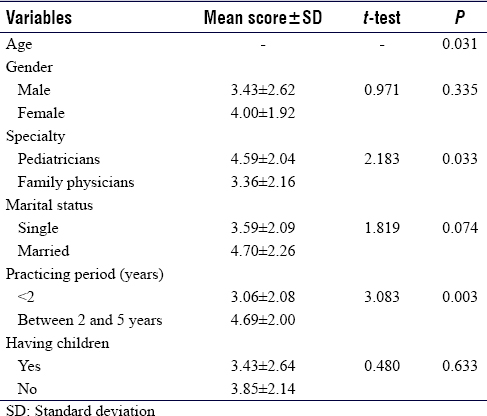 Awareness regarding swaddling techniques and their relation to DDH is suboptimal among the first-line encounters to these patients, as found by our results. Almost one-third of the participants have practiced swaddling on a child, with only 42% of them using the safe technique. Our study focused on family physicians and pediatricians as they are usually the first-line patients' encounter, and generally, education about these topics should be held with them. Hence, their perception and knowledge regarding this topic are essential.

Almost 50% of the questions regarding swaddling and its relation to DDH were answered incorrectly. Participants who practice for more than 2 years in their specialty had higher scores. The higher the age of the participants, the more answers were answered correctly, which could be attributed to more practicing period. There was no difference between males and females or those who are married or not in the knowledge scores. In addition, having children was not associated with higher knowledge scores. Moreover, there was no correlation between practicing swaddling before and their knowledge scores. Interestingly, pediatric residents had higher scores than family medicine residents.

These data demonstrate that first-line physicians encountering DDH patients (family physicians and pediatricians) need educational sessions regarding this topic to deal with them safely. In addition, this will give them insight into how to educate their patients about the risks of swaddling and safe swaddling practices, and hopefully, they will practice that as initial encounter as pediatric residents early after birth or as family medicine residents in the well-baby clinic as a regular follow-up with each vaccination visit.

The limitations were being a single-center study and with a small sample size and lack of long-term assessment of the effect on knowledge or on residents' behavior.

More than half of the participants had a lack of knowledge about swaddling and its relation to DDH, and about 22% of them had practice swaddling in an unsafe method. A longer practicing period was associated with more knowledge about the topic. The educational intervention significantly increased the knowledge and perception of the participants, regarding swaddling and its relation to DDH. More than 91% of the participants were able to identify the safe practice of swaddling after the educational intervention compared to 32.8% before it. This clearly means that first-line physicians encountering DDH patients (family medicine and pediatric residents) need educational sessions on this topic to deal with them safely and educate their parents about safe swaddling techniques.

Educational interventions regarding swaddling and its relation to DDH are of great value and can have a huge impact on prognosis of children and worsening of the hip dysplasia. Future studies with larger sample size are recommended. Practical intervention sessions could be more helpful and a subject for future research concerning DDH and other topics.

This study was approved by the Institutional Review Board of King Abdullah International Medical Research Center, National Guard Health Affairs, Jeddah, Saudi Arabia, with Memorandum Reference No. RYD-18-417780-130171, dated July 26, 2018. Participants were consented to participate in the study.